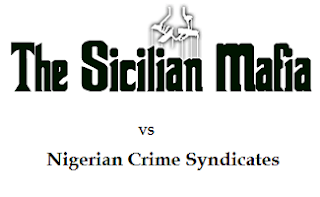 United Kingdom Guardian Newspaper reports that an anxious and unholy alliance exists on the streets of Palermo between the traditional Sicilian mafia and Nigerian migrants encroaching on their illegal trades.


Prosecutors in the Sicilian capital of Palermo are warning that a new alliance between the mafia and Nigerian criminal gangs moving in from Libya could herald a new era of organised crime.

“Even the Sicilian mafia has to deal with the wave of migration from Africa,” said Leonardo Agueci, Palermo’s deputy chief prosecutor. “The neighbourhoods under mafia control have changed profoundly in recent years due to the growing presence of foreigners, especially Nigerians coming on boats. Among them, there [are a small number] of people who want to transfer their illegal trafficking, linked to prostitution and drug dealing, to Sicily. And the mafia was quite happy to integrate them into their criminal business.”

In Ballarò, a mafia stronghold market area in the historic centre of the city, a whistle is traditionally used by drug dealers to attract customers, who are offered hashish, marijuana and cocaine. In the past this signal was only used by Italian dealers working for Cosa Nostra, the Sicilian mafia. About two years ago, when Nigerians adopted the whistle, offering drugs at a discount, it was clear that a new criminal organisation had set foot in the city.
State prosecutors in Palermo say the mafia brings in drugs and the Nigerians distribute them among both Italian and African clients.

“It is clear there is a subordinate relationship between Cosa Nostra and the Nigerian clans, with the former controlling the latter,” said Agueci. “If a Nigerian boss tried to rebel against Cosa Nostra, he would probably end up incaprettato [tied up and killed] in the countryside.”

In Ballarò, profits from pizzo – the tax levied on merchants by the Sicilian mafia – are reinvested to buy drugs for resale to Nigerian clans and their dealers. To have better control of their new African partners, Cosa Nostra seems to have made another rule clear: no guns.

“We have reason to assume,” said Agueci, “that the mafia prohibits Nigerians from owning firearms. So when Nigerians have to settle accounts within their community, they do it with axes and machetes.”

Prostitution is thought to be one of the most profitable businesses for the Nigerian clans. According to police data, 90% of prostitutes in Palermo come from Nigeria. Traditionally, Cosa Nostra is reluctant to directly manage this business – according to the old mafia codes of honour, prostitution is considered a shameful activity.

Recent months have seen a spike in violence linked to Nigerian gangs.

In the state court of Palermo a trial against an alleged Nigerian gangster, Austin Ewosa, 32, is under way. His street name is John Bull and he was arrested in September 2014, in a local bar in Ballarò. He stands accused of assault, intimidation, criminal association and attempted murder, charges that could see him jailed for 10 years.
According to the prosecution, Ewosa is the head of the feared Nigerian clan Black Axe, a criminal organisation born as a sort of student fraternity in the 1970s at the University of Benin City.

On the night of 27 January 2014, Ewosa and his thugs allegedly dragged a 27-year-old man called Don Emeka down Via del Bosco, not far from Piazza Ballarò, where they brutally disfigured him with axe and machete blows. Emeka was allegedly one of dozens of Ewosa’s victims and was punished for not having submitted to his power.

The risk of Nigerian criminals operating in Europe was revealed in a letter sent to the Italian prosecutors from the Nigerian ambassador to Rome in 2011.
“I would like to draw your attention to the new criminal activity of a group of Nigerians belonging to secret societies, forbidden by the government because of violent acts,” wrote the diplomat. “Unfortunately, former members of these sects were able to get into Italy where they re-established their criminal organisations.”

According to the prosecutors, some of the Black Axe members, including Ewosa, and also his victims, arrived in Sicily by boat. Most of them were temporarily hosted in the immigration camp at Caltanissetta, in the centre of the island.

Legal and well established Nigerians in Sicily are paying the price for this new criminal alliance between the gangs and the mafia. “Many honest Nigerians live in Palermo,” says Osas Egbon, 35, vice-president of Women of Benin City, an association that tries to take Nigerian prostitutes off the streets. “They work hard and live in fear. These families are victims on two fronts. They are victims of both Sicilian and Nigerian criminality.”

For now, Nigerians and Sicilians live in peace with the Abuja clans at the service of Cosa Nostra. But the equilibrium may not last.

“At the moment,” says Agueci, “it is hard to imagine Nigerians taking over the Sicilians. Cosa Nostra is too strong and can’t be compared to the Nigerian clans.’’

But the old Palermo godfathers have been replaced by young mafiosi who don’t seem to carry the same authority as their predecessors. Meanwhile, the Nigerian gangs are getting stronger.