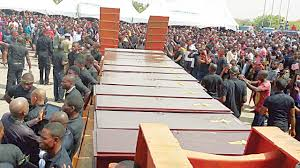 These are obviously not the best of times for Benue state and her citizens considering the series of killings taking place in the state in the last five months.

Perhaps Benue known in official quarters as the ‘Food Basket of the Nation’ has somewhat become a ‘bloodied basket’ and killing field, no thanks to suspected herdsmen who viciously bare their fangs on innocent local inhabitants and farmers leaving in their trail tales of sorrows, tears and blood.

Though a full military operation code named ‘Operation Whirl Stroke’ was launched on May 8th to stem the killings, after a similar but less effective Exercise Ayem A’Kpatuma wound up with little results to show, reasonable success may have been achieved through this latest operation, given a lull in the spate of killings. However, the attacks and killings have persisted.

A timeline of these attacks includes the May 16th  morning attack on Ukemberagya community, Gaambe-Tiev council ward of Logo local government area where no fewer than three persons were killed.

The attackers also set ablaze several houses, huts and food barns in five villages affected in the invasion. The attack came barely 24 hours after Vice President Yemi Osinbajo visited the Local government area to commiserate with victims of past attacks in the area who now reside in IDPs camp at Anyiiin.

Then came the May 18th  attack that claimed six lives including a Makurdi Primary School Head Teacher, Mr. Stephen Tavaku, his Junior Secondary School counterpart, Mr. Christian Anankpa and four others including women who were reportedly waylaid and killed by the suspected militant herdsmen at Mbatonbo community in Gwer local government area of the state.

The victims were among the 10 persons who went to the area to survey and acquire some farmland for rice cultivation under the umbrella of their teachers’ cooperative society.

May 20th  recorded another dastardly attack when two personnel of the Operation Whirl Stroke were at the early hours of that Sunday reportedly ambushed and killed by the suspected herdsmen at Tseke village a border community between Benue and Taraba states in Logo local government area of the state.

Saturday Vanguard gathered from a source in the area that the attackers also burnt one of the patrol vehicles of the security personnel leaving some of them with serious injuries while others were reportedly taken captive by the attackers.

Again on May 21st, no fewer than five persons were reportedly killed by the marauders at Mchia village, in Logo local government area of the State.

Meanwhile, Operation Whirl Stroke also reported that one of its personnel was killed and declared another personnel missing after the troops successfully killed 35 militant herdsmen in gun battles in Benue and Nasararwa and recovered cache of arms.

22nd  of May was another sad day for Benue when three mourners were reportedly ambushed and killed on Makurdi-Naka road by suspected herdsmen while returning from Ayati-Ikpayongo in Gwer East local government area of Benue state where they attended the mass burial ceremony of the two Catholic Priests and 17 parishioners who were killed last April at Mbalom, Gwer East Local government area by militant herdsmen.

A couple and one other were also murdered on May 26th., in two separate incidents in Logo and Guma local government areas of the state.

Saturday Vanguard gathered that the couple, Mr. Kwaghaondo Ugber and his wife Mne were killed in an ambush by the suspected armed militant herdsmen on Anyiin road, at Tse Adendem village while on their way to Anyiin town.

The killing spree continued on May 31st  when suspected militant herdsmen reportedly ambushed and killed two unsuspecting travelers on a motorbike close to Mbazar community between Anyiin and Akwana in Logo local government area of Benue state.

Saturday Vanguard gathered that the attack also left two others with serious injuries.

It was the turn of Kwande local government area on June 3rd when they invaded Tseadough village in Mbachom, Yaav Ward, killing eight persons including women and children. That community was also razed.

On June 6th, a coordinated attack was launched on communities in Logo and Guma local government area where 15 persons including two National Examination Council, NECO, examination candidates were killed.

Majority of the victims of that attack were mourners who were attending a wake keep for a deceased relation but didn’t live to bury their dead.

The attackers as usual were said to have burnt several houses and farmlands in Tse Shan in Saghev and also left several persons with serious injuries.

Reacting to the killings, chairman of Logo local government area, Mr. Richard Nyajo lamented that the killings in the areas had become almost a daily affair adding that many of the killings were under reported due to the terrain of the affected areas

“Many of the killings were not reported because sometimes when they happened the people would hurriedly bury their dead. But I must commend the security personnel who were drafted to our communities for their resilience and spirited efforts to check the spate of attacks.

“They have been doing a yeoman’s job to curtail these attacks. In fact they are our saving grace, but for them, Logo would have been taken over by the militant herdsmen.

“Their target is to take over our land, it is not about grazing anymore, they vowed to take over Benue valley and that is the agenda they are currently executing.” Nyajo stated.

Meanwhile the Benue state Police Commissioner, Fatai Owoseni in a recent statement disclosed that a total of 188 suspects had been arrested and were facing prosecution in courts for violating the Benue state Open Grazing Prohibition law.

Owoseni said the suspects included those involved in cattle rustling and those who engaged in open grazing of cattle in parts of the state.

https://www.vanguardngr.com/2018/06/benue-timeline-latest-killings-launch-last-military-operation/
Posted by Don Okereke at 8:15:00 am