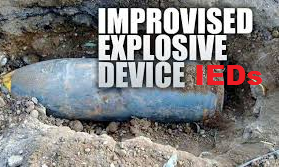 The Nigerian Army has expressed alarm over what it described as emerging but dangerous trend of the use of Improvised Explosive Devices, IEDs, as weapon in the South Eastern part of the country.


The Army said that although the zone was the most peaceful among all the six in the country, the introduction of IEDs as means of fighting enemies had become a source of great concern to the military and other security agencies.

The Deputy Director, Army Public Relations, 82 Division of the Nigerian Army, Col Sagir Musa, made this known while speaking at a media summit by the Nigerian Union of Journalists, NUJ, at Concorde Hotel Owerri, yesterday.

He spoke against the backdrop of the the bomb explosions at the country home of the President General of Ohanaeze Ndigbo, Chief Nnia Nwodo, in Ukehe, Igboetiti Local Government Area of Enugu State with the second and third explosions occurring at a Catholic Church compound at Nike, near Enugu and a popular yam market, also in Enugu metropolis last month.

“In view of the obvious security threats in the South East such as kidnappings, cultism, armed robbery, communal conflict, farmers-herdsmen clashes, political violence and secessionist agitation as well as the emerging dangerous trend of the use of IED as seen in the recent explosion in Ohanaeze leaders’ compound,    a catholic church and a popular yam market, there is the need for members of the public especially the media to be more watchful, so as to sensitize the public on the disturbing trend and the necessity for partnership with the security agencies with the view to collectively and effectively contain these challenges,” Musa said.

He, however, said that even at that, the South East remained the most peaceful, among all the geopolitical zones in the country as major security challenges that could have spread throughout the region were nipped in the bud.

According to him, in the “midst of all these security threats, it is obvious that the South East Zone is the most peaceful region in Nigeria. Major security challenges that could have dramatically disturbed the peace; security and stability of the region have been effectively silenced. “Consequently, there is the need for the various tiers of government, security agencies, civil society organizations, the media and members of the public to collectively cooperate to improve, if not sustain, the current security situation,” in the region..

On terrorism and other criminalities, he said,”Nigeria is currently facing multiple security challenges that are spread across the major regions of the country.

“None of the regions in Nigeria is insulated from one crisis or the other. For instance, there are the lingering challenges of terrorism, cattle rustling, armed banditry, kidnappings, arms and IED proliferation and other sundry crimes such as armed robbery in the North East region. “There are also the threats of armed robbery, insurgency, ethno-religious disturbances, cattle rustling, kidnappings and political crisis among other menaces in the North Western part of Nigeria.”

Culled from: Vanguard Newspaper
Posted by Don Okereke at 8:34:00 am