12 Telltale Signs, Tips To Avoid Been Victim of Employment Scam 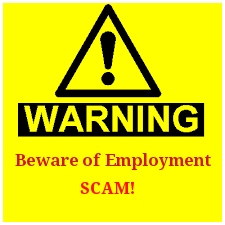 What is an employment or job scam (fraud)?
A job scam (419 in the Nigerian parlance) happens when a swindler impersonates or fronts as a genuine employer with the promise of an inviting career opportunity which often entails that the prospective job-seeker pays money in advance. Please for the purpose of this essay, I shall be using employment and job, fraud and scam interchangeably.

Job or employment scam, a global problem:
According to Scambusters.org, ‘’poor economy and new tricks drive up job scams by 500%’’ in the United States of America. Statistics from the City of London Police’s National Fraud Intelligence Bureau (NFIB) - reckons that the most defrauded job-seekers were between the ages of 18 and 25 and that on average, victims lose approximately £4,000 to job scams. Cases abound of job seekers been robbed, kidnapped or maimed because they failed to do a due diligence on prospective recruiting companies.

Sources and variants of employment scam:

There are many sources, variants or formats of employment scam: it could be in the form of an advert in a newspaper, website or social media platforms such as LinkedIn, Facebook, Craiglist, OLX, job portals or even by referral from someone who claims to be your acquaintance or old school mate. Sometimes they claim to be recruiting for government establishments: Immigration Service, Customs, and security agencies amongst others. Masterminds of employment scams keep reinventing their templates/formats for varied audiences (‘magas’) as the victims are called in the 419 parlance. While the target audience for typical ‘yahoo yahoo’ or internet dating/romance scams are unleashed on vulnerable and perennially love-seeking Caucasian women, fraudulent employment and multi-level marketing Ponzi schemes seem to be the executable format for desperate, vulnerable unemployed Africans. Knowing that many Africans yearn to travel overseas for greener pastures, fake visa (lottery) racket is also thrown into the mix.

The unemployment time-bomb in Nigeria:
Aside from the Boko Haram miasma, the unparalleled insecurity stifling and pervading the length and breadth of Nigeria, another time-bomb with potential national security ramifications is unprecedented level of youth UNEMPLOYMENT. There’s no point citing the extremely specious, redacted government unemployment guesstimate, statistics in Nigeria. But to give us an idea, Nigeria’s National Bureau of Statistics, NBS, says 504,596 Nigerians joined the labour market in the first quarter of 2015. Nigerian universities and higher institutions churn out hundreds of thousands of graduates annually and there are few new job openings, the supply is greater than the demand. The few jobs out there, especially those in government establishments are exclusive preserves of well-connected, sometimes quota candidates who may be less qualified. Devoid of some cushioning effects (food stamps, unemployment, and housing allowance/benefit) to the hapless, the situation in Nigeria can be likened to that of a jungle where only the strongest and fittest survives. The multiplier-effect of a scenario of abject poverty in the midst of plenty is increased desperation by youths or the unemployed to catch up with the Joneses and a growing employment scam industry which preys on the vulnerability of mostly naïve, distressed unemployed folks.

The intersection of unemployment, crime and security:
While one does not in any way exonerate or extenuate folks who perpetuate employment fraud or crimes generally; there seem to be a relationship between unemployment, frustration, despair and crime. We are all aware of the age-long, trite sayings that: a hungry man is an angry man and that an idle mind is a devil’s workshop. To further buttress how youth unemployment and crime (kidnapping) are intertwined, a scenario suffices: while recounting his horrible experience in the hands of kidnappers, a legal luminary - Chief Mike Ozekhome was quoted as saying that his kidnappers, ‘’spoke Queen’s English, discussed and analyzed politics knowledgeably’’.  It follows that youth unemployment directly or indirectly has a butterfly-effect on fraudulent employment schemes, incessant armed robbery, kidnapping for ransom, crude oil bunkering and pipeline vandalization, prostitution, and is feasibly one of the factors fueling terrorism, insurgency and instability in Nigeria.

Real life experience of employment fraud:
This essay was prompted by a recent experience of a friend of mine who nearly fell for a ‘Shell’ Petroleum Development Company (SPDC Nigeria) employment scam. One thing led to the other and my friend was sent an ‘’acceptance form’’ for a job in SPDC Nigeria. He showed me the so-called acceptance letter which I perused with my trained eyes. Having gathered earlier that Shell was on the verge of retrenching 6,500 staff and coupled with the aforementioned red flags, I doubted the plausibility of the said job offer emanating from Shell and promptly told him I was 95 percent sure it was a job scam and asked him to be on his guard. The email address reads: NIGERIANSHELL.SHELL.COM (all uppercase letters) which I know the genuine Shell will not make that mistake. The Shell logo looked very much like copy and paste, the grammar was not convincing and fraught with exclamation marks (!). They pegged his monthly salary in the neighborhood of N500, 000.00 (about $2,200), not bad for a low skilled job. Dude did not take my warning seriously. Him and his wife were already praying, fasting about the miracle job offer and writing long list of things they needed to buy once he starts work with Shell. Somehow he had spent nearly N10, 000 in the process: phone calls, transportation, scanning and emailing dozens of documents requested of him. He felt it was genuine since someone who claimed to know him referred him to the opportunity and besides they didn’t demand for huge sum of money ab initio and that the N10k he spent was negligible considering the fantastic salary package. I told him scammers don’t always put hefty monetary demands from the onset and asked him to string along but must avoid ‘investing’ additional money for whatever guise. After sending back the ‘’acceptance letter’’, they told him he needs to get a letter from the King of Bonny Kingdom which they will help him fix. It was at this stage they dropped the bomb shell; he needs to pay N150, 000 to enable them procure the recommendation letter from the King of Bonny! That was when it dawned on him the whole thing was a scam.

Yours sincerely also had a similar experience with job scam in the past. I got a LinkedIn invitation from someone claiming to be Nigeria’s erstwhile Minister of Petroleum – Mrs. Diezani Alison Madueke. I checked out her profile which ticked the right buttons – more than 500 contacts, schools attended, qualifications with dates amongst other were meticulously enumerated and her picture was there. I was curious but nonetheless I accepted the invitation. ‘She’ then sent me a message asking if I am interested or knows someone who is interested in enlisting into the Immigration Service, that she’s got a slot there. I promptly knew it was a scam and didn’t respond to her message.

Signs, tips to guard against been victim of employment fraud:

Sequel to the foregoing and to prevent folks from learning the hard way, I decided to aggregate telltale signs or red flags to fish out phony, fraudulent employment offers and scam messages:

1.     Many a times you can’t remember and didn’t formally apply for the job but they contacted you saying they found your CV online. Don’t ever give out your personal information, bank details over the phone to a stranger and be careful who, where or what employment agency you send your CV, personal information to. Note that scammers troll online recruitment platforms looking for victims to prey on.

2.     The employment process happens pretty fast; you get an instant offer/acceptance letter within hours, days. Phishing scams and identity theft are for real. Research or Google a prospective company to ascertain whether they are actually recruiting and they are who they claim to be.

3.     The golden rule to detect a job scam is that it often entails you paying a fee in advance in the guise of say a ‘’processing fee’’, ‘’test fee’’, ‘’placement fee’’, ‘’background checks’’ etc. or for training. They also create some sense of urgency by giving you a deadline to pay the money.

4.     A mouth-watering salary package especially for an unskilled role may also be a red flag that a job offer may after all be fraudulent.

5.     Be very cautious of job adverts with vague job descriptions that claim little, no experience or qualifications are needed.

6.     Take note of the grammar, punctuation, spelling mistakes or typos on the message (email, SMS) sent to you. More often than not, scam employment emails or messages are written in UPPER CASE letters, spiced with lots of exclamation (!) marks and may sound emotional (unprofessional). Remember some of the perpetrators of fraudulent employment schemes are probably illiterates and unemployed themselves.

7.     The email addresses are probably free web mailers such as Yahoo mail, Google mail, Hotmail amongst others. That is not to say that genuine companies that don’t want undue pressure or interference cannot use free email platforms to solicit for applications. Even if it looks like a genuine website, bear in mind that websites and email address can be cloned. An example is the one I cited above: NIGERIANSHELL@SHELL.COM or say SHELL@GMAIL.COM, VACANCY@SHELLNG.COM. A company cannot claim to be Halliburton and ask you to send your CV to halliburton@yahoo.com. If it is truly Halliburton, then their email address will match their website e.g. vacancy@hilliburton.com.

8.     Genuine recruiters will ask that you email or forward your CV to them. Be on your guard if you are asked to send your personal details (name, address, qualifications etc.) via SMS.

9.     Have you ever gotten a call from somebody you don’t know claiming to have served with you in the same Platoon during your NYSC days? They go ahead telling you they now work with Slumberger, NNPC, Shell etc. and promise to help you secure employment in their place of work. This seems to be a new template for scammers. A lot of people have fallen for this scam. The caller may have gotten your phone number from the NYSC Corper’s magazine of the state you served.

10.          Fraudulent employment syndicates sometimes pretend to be reputable international humanitarian NGOs. Note the difference between this two: USAAID and USAID.

11.          Please beware of those get-rich-quick how-I-make-$5,000-a-day-working-from-home, multi-level marketing hogwash or pyramid schemes which are fashioned after the infamous ‘’Ponzi scheme’’ - pays returns from one’s money or from subsequent investors than from ACTUAL profit. Staffcentrix, a firm that focuses in screening online job offers, asserts that less than 2% of work-at-home career opportunities advertised on the Internet are genuine. If the opportunity entails making or selling a product or service, ascertain if there is truly a market for it and speak to people in the know about it.