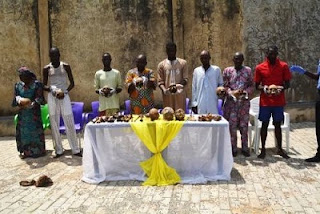 
The suspects were busted by a Joint Investigative Team of the Nigeria Police Force, following information from the public which led to the search of the house of the principal suspect, Azeez Yakubu. A search of Yakubu's residence at No. 20 Ile Opa Adeta Compound, Ilorin led to the discovery of 11 human skulls, some pieces of human bones, human hairs, and powder suspected to be ground human bones and charms

The statement read: "The suspects [were involved] in kidnapping, murder, ritual killings, exhuming of dead bodies from where buried in the community, removing their vital body parts such as the skull, genital organs, eyes, human hair, certain body bones and sell to prominent personalities in the country for rituals and spiritual powers. The suspects confessed and admitted to have sold thirty-one (31) human heads to some personalities in Ilorin and other towns in Kwara State and other contiguous states to Kwara State.

"Azeez Yakub a.k.a Baba Muri (Principal Suspect) who is a notorious armed robber and have been arrested, charged to court and convicted to prison severally. This suspect now in Police custody has made confessional statement to the Police Investigation Team. He confessed and admitted that one Abdulfatai Kadri a.k.a. (Adedoyin), the vigilante commander in Adeta Zone, introduced him to the business and also supplies the human skulls and other body parts for him to sell. Eleven (11) Human skulls were recovered from his possession during police search on his residence. The principal suspect confessed that Abdulfatai Kadri has brought to him twenty (20) human skulls that he exhumed from the Ilorin Community Central Burial ground situated after [Eid] praying ground in Ilorin, Kwara State. He further admitted that Abdulfatai Kadri a.k.a. Adedoyin usually brings in the human heads to him in batches of four (4), six (6), eight (8) for safe keeping and usually collects them within a day or two, and also informed him of the personalities in Ilorin and others he usually supply the heads to.

"Abdulrasaq Babamole was equally mentioned by the principal suspect, Azeez Yakub to have bought one (1) human skull from him. Powder suspected to be grinded human bones was recovered in his possession. He has also confessed to the crime admitting his criminal role.

"Abdulganiyu Bamidele: He confessed and admitted to buying human skull from the principal suspect, Azeez Yakub and supply same to his friend one Kayode still at large. All the suspects have made confessional statements to the Police Investigation Team and have confessed and admitted to the various criminal roles they played in the recent kidnapping, gruesome murder and ritual killing attacks on innocent residents in Ilorin Metropolis and other towns in Kwara State.

"Investigation is still ongoing and efforts being intensified to arrest other suspects including prominent personalities mentioned by the suspects but who are still at large. They will all be arraigned in court on completion of investigation."