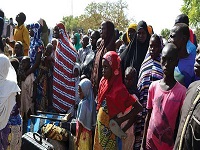 The United Nations High Commission for Refugees (UNHCR), says the North East Nigeria which witnessed some of the highest Boko Haram onslaught, is not yet conducive for the return of Internally Displaced Persons (IDPs).


Ms Liz Ahua, the Regional Representative for West Africa and Coordinator for Nigeria, said this on Monday in Abuja at the opening ceremony of the Lake Chad Regional Protection Dialogue. Ahua said that the persistent threat from Boko Haram, presence of mines and absence of basic services posed acute humanitarian and protection risks for the affected population.

She said that the situation was not only peculiar to Nigerians but all border countries in the Lake Chad Basin. She explained that the regional meeting was meant to adopt a working blueprint on regional protection of the Lake Chad basin and safe return of refugees and IDPs. “This meeting is meant to exploit how we can better ensure IDPs physical safety, access to asylum and protection, including protection from forced expulsions. “Many refugees and IDPs have experience high levels of violence, many suffer from trauma, and are in need of support in what practically and systemic ways can we help them.

‘’She said that over 2.7million people in the region had been displaced, while 20million people had been negatively impacted by the insurgency in Nigeria, Cameroon, Niger and Chad. “The lake Chad today faces fundamental protection crises here in Nigeria and across the neighbouring boarding countries. “The Boko haram insurgency and spillover into Cameroon, Niger and Chad has led to the loss of thousands of lives, has caused a massive displacement of over 2.7million people.’’

The three days Regional Protection Dialogue on the Lake Chad Basin has senior government officials from Nigeria, Cameroon, Niger and Chad in attendance. Also present are representatives of national, regional and international organisations (including UN agencies), donor countries, academia and civil society. The meeting is expected to identify the most urgent protection risks in the Lake Chad Basin resulting from the conflict-induced crisis and to agree upon comprehensive actions at local, national, and regional levels.