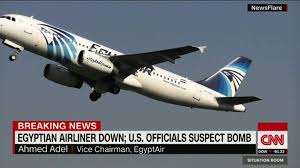 There are heightened fears that EgyptAir Flight 804 was downed by a 'laptop bomb' device similar to one which blew a man out the side of a passenger jet - Daallo Airlines Flight 159 which Somali militant group - Al-shabab claimed responsibility for.


It is believed such a device could explain the reports of multiple smoke detectors going off inside the plane before it vanished from radar some days ago.

Critically though, if this is the case, it could mean that terrorists have discovered a way of evading airport security checks.

Mystery still surrounds what brought down the Paris to Cairo flight over the Mediterranean seven days ago, killing all 66 people on board.

It's incredible no more people were killed when the explosion went off in the cabin
Investigators are still urgently searching for the 'black box' recorders with vital information stored on them before their batteries run out - the only way they have of proving or disproving several emerging theories.

But security experts are now believed to be considering that an explosive was smuggled on board the flight inside a computer - as with the Somali jet that killed one passenger in February.

In that incident, a laptop exploded on board a Daallo Airlines Flight 159 shortly after the plane took off from the Somali capital Mogadishu.

The man who died was sucked out of the fuselage by the hole that bomb made in the side of the Airbus A321 and he fell to earth.

Pilot Mohamed Said Ali Ali Shoukair is believed to have battled to control the plane
Incredibly the pilot managed to turn the plane around and make an emergency landing at Mogadishu International Airport with the gaping hole in its side - and suffered no further casualties.

The laptop bomb on the Somali jet has this week been highlighted by two top security experts.
One, Robert Liscouski, is a former senior official at the department of Homeland Security, while another, William McGann, runs Implant Sciences which manufactures explosive detection equipment.

They say the device built into a laptop computer - and since claimed by the Somalian militant group al-Shabaab - has been "a wake-up call for security agencies and those working in the field of explosive detection".

They said in a jointly-written paper: "There is a high-stakes contest between terrorists developing new techniques to try to beat airport security and the security officials and technologists working to keep bombs off planes."

Information released so far suggests that multiple smoke detectors in different parts of the aircraft went off before it went down as the pilot struggled to keep it in the air.

Until the black boxes are found, nobody is sure whether this was a symptom of malfunction or catastrophic damage caused by an explosion.

French investigators have confirmed that the smoke alarms may have been activated even if there was no fire.

They told the Financial Times that monitors "can be triggered by air condensing rapidly inside the aircraft following a sudden depressurisation of the aircraft, caused by a catastrophic structural failure".

A laptop bomb of the type used on the Somali jet could create that scenario.