Is The U.S Tactically Soft-pedalling On Paying Ransom for ISIS Hostages? 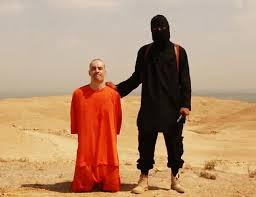 Obama Administration Set To Loosen US Hostage policies. The White House will announce looser restrictions on private ransoms for hostages, while appointing a special envoy to lead the government’s contacts with foreign nations on hostage matters.


President Obama plans to announce Wednesday that the White House will no longer threaten families of American hostages kidnapped overseas with criminal prosecution if they attempt to pay ransoms for their relatives to groups like Islamic State or Al Qaeda.

Mr. Obama also plans to reiterate that the US government will stick to its “no concessions” policy, but the government can communicate and negotiate with captors, or help family members seeking to to do so, The New York Times reported.

An official told the Times that the report describing the changes will state the Department of Justice “does not intend to add to the families’ pain in such cases by suggesting they could face criminal prosecution.”

The change in hostage policies will be made after the government faced fierce criticism for failing to save the lives of several American hostages beheaded by Islamic extremists, or killed while in militant custody.
Last November, Obama ordered a hostage policy review with a specific emphasis on how the US treats hostages’ family members.

As part of the review, some family members of American hostages were interviewed, but not all the families were willing to participate in the review process. According to Foreign Policy, out of 82 families the administration reached out for the review, only 24 families chose to participate.

Hostages’ families have complained that they were confused by US hostage policies and were threatened with prosecution when they did consider ransom payments.

For years, the US has officially strictly upheld its no-concession-to-terrorists policy while many European countries routinely paid ransoms for captives. Last summer, The New York Times reported that since 2008 Al Qaeda and its affiliates have received at least $125 million in ransom money from some European countries, including Germany, Austria, France, Italy and Switzerland. Those countries officially deny paying ransoms to terrorists.

Under the changed hostage policies, Obama will appoint a special envoy to lead the government’s contacts with foreign nations on hostage matters.

Rep. Duncan Hunter (R) of Calif., a member of the House Armed Services Committee, has already slammed the leaked policy changes as “nothing more than window dressing.”

“After a long, drawn-out review of U.S. hostage policy, the changes offered up by the White House prove that neither the right questions were asked nor were any lessons learned,” he said. Representative Hunter is co-sponsoring a bill that would create a “hostage czar,” to centralize US government efforts to find and free American hostages.

It is not clear how many American hostages are currently being held by terrorists. The US government said in February there is at least one other hostage in the Middle East, and according to IntelCenter, a group that monitors terrorist threats, currently there are seven American hostages in different parts of the world.