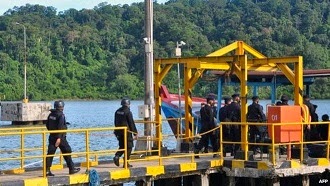 Eight convicted drug smugglers have been executed by firing squad in Indonesia. The executions took place in Besi prison on the island of Nusakambangan early on Wednesday morning local time.
However, the execution of a ninth convict, a woman from the Philippines, was postponed at the last minute.

Among those killed were Australians Andrew Chan and Myuran Sukumaran. Earlier, the men's families were allowed to see them for the last time.
Australia had appealed to Indonesia to delay the executions, citing alleged flaws in how their case was prosecuted.

After the executions, Steven Ciobo, parliamentary secretary to Australian Foreign Minister Julie Bishop, tweeted: "There are few greater displays of abuse of state power and regressive thinking than the death penalty."

Those put to death also include Nigerian nationals, a Brazilian and an Indonesian.

Filipina woman Mary Jane Fiesta Veloso was also due to be executed, but this was delayed after a request by the Philippine president, a spokesman from the attorney general's office told the BBC.
The request came after someone suspected of framing Veloso to carry heroin into Indonesia surrendered to police in the Philippines, the spokesman went on.

Indonesia would give Veloso the chance to testify as a witness in the trial in the Philippines, the spokesman said.

Her mother described the last minute reprieve as a "miracle".

A Frenchman also convicted of drug offences, Serge Areski Atlaoui, has also been sentenced to death but has an appeal outstanding.

Earlier, the eight prisoners were allowed to spend their final moments with their families.
Relatives of Chan and Sukumaran were visibly distressed and Sukumaran's sister collapsed and had to be carried to the prison.

Australia had urged Indonesia to delay the execution of its two nationals until a corruption investigation into their case was complete.
Chan and Sukumaran, along with seven other Australians, were arrested in Bali in 2005 for trying to smuggle more than 18lb (8.2kg) of heroin from Indonesia to Australia.

The pair were later found to be the ringleaders of the group and sentenced to death. The other seven members of the "Bali Nine" are currently serving either life or 20 years in prison.

Indonesia has some of the toughest drug laws in the world and ended a four-year moratorium on executions in 2013.

It says it takes a hard line because of the country's own drugs problem - 33 Indonesians die every day as a result of drugs, according to Indonesia's National Narcotics Agency.