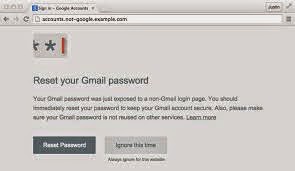 Google announced a new tool for its Chrome browser on Wednesday that, it hopes, gives its users an easy way to shore up their security.


For all of the (justifiable) panic over the high-tech capabilities of sophisticated hackers, one of the biggest security traps for the average person is still being tricked into sharing your password with a bad guy. Sometimes that happens because you're fooled by a look-alike log-in site. Other times, someone may hack another site where you just happen -- against security advice -- to use the same password.

[How to keep track of your passwords without going insane]
Neither should happen with the new tool, a plug-in for Google's browser called "Password Alert," which will warn you when you've entered your Google password in a non-Google site. Unlike other security tools, such as Google's Safe Browsing, it doesn't judge whether the site you're on is malicious or not -- its sole goal is to make sure that you're only using your Google password for Google services.

The company said in the post that phishing attacks, in which users are tricked into giving up their log-in credentials, can be successful up to 45 percent of the time. And, the company estimates, roughly 2 percent of all Gmail messages are phishing messages.

The tool evolved from one that Google uses internally. It will work for Google and Google Apps for Work accounts, the company said in an official blog post Wednesday. According to the post, if you use Password Alert, a "scrambled" version of your password is stored on your computer. It then uses that to determine whether it should bring up a warning screen -- something it should do any time you type your Google password into a non-Google password field.

Google for Work users can also request to have their account administrators set up the tool for all of an organization's accounts.

It's no secret that passwords are a pain. But while every account should ideally have its own password, the important ones -- such as your primary e-mail and financial accounts -- really, really should have their own.
Google's new tool stands as a good, simple reminder of that -- if you want reminding, that is. To use it, you'll have to head to the Google Chrome store, starting Wednesday, for the free download.