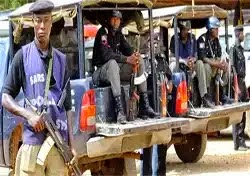 A patrol van belonging to the Bayelsa State Special Police Squad, code-named: Operation Doo Akpo, has been attacked by gunmen suspected to be militants, killing a policeman while two of the militants lost their lives in the ensuing exchange of fire during the attack.


This was just as gunmen operating on a speedboat kidnapped four employees of the Nigerian Agip Oil Company (NAOC) in a separate incident.

It was gathered that the two incidents occurred on Monday in Nembe and Southern Ijaw Local Government Areas of the state.

The attack that led to the death of the policeman was said to have occurred at about 5pm in Opu-Nembe, Nembe Local Government Area.

It was learnt that the slain policeman, a sergeant, whose name was given as Matthew Simon, was hit by the assailants’ bullets.

The patrol van was drafted to guard workers constructing the Ogbia-Nembe road.
Though the mission of the gunmen was not clear, a security source suspected that they may have arrived the area to abduct some of the workers.

According to him, some of the workers constructing the road were kidnapped in a similar manner last year.
They were however not successful as the policemen engaged them in a gun duel, leading to the death of one of the policemen, while the police said they killed two of the militants”, said the source who did want to be named.

He however said the policemen claimed that the militants escaped with the dead bodies of their colleagues.
In the Southern Ijaw incident, the four kidnapped Agip workers were said to have been abducted and taken to an unknown destination in the creeks by gunmen.

It was learnt that the victims were traveling on a speedboat from Amasoma to Ogoimbiri, all in Southern Ijaw.

“Their speedboat was double-crossed by gun-wielding men who shot in the air to frighten them. The gunmen took them into their boat and zoomed off. Our river is a death trap”, the source said.

When contacted, the State’s Police Public Relations Officer, Asinim Butswat, said he had not received details of the incident.