Suspected Boko Haram gunmen have kidnapped eight girls aged between 12 and 15 from a village near one of their strongholds in north-east Nigeria, police and residents say.

"They were many, and all of them carried guns. They came in two vehicles painted in army colour. They started shooting in our village," said Lazarus Musa, a resident of Warabe, where the attack happened on Monday night.

"Many people tried to run behind the mountain but when they heard gunshots, they came back. The Boko Haram men were entering houses, ordering people out of their houses."

A police source, who could not be named, said the girls had been taken away on trucks along with looted livestock and food.

The Islamist rebels are still holding more than 200 girls they abducted from a secondary school on 14 April. The Boko Haram leader Abubakar Shekau threatened to sell those girls "on the market" in a video released to the media on Monday. He said Allah had told him to sell the girls. 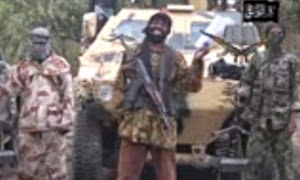