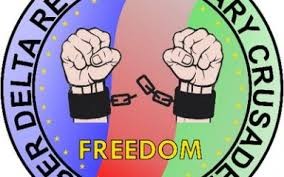 A Niger Delta militant group known as the ‘’Niger Delta Revolutionary Crusaders’’, NDRC, has threatened to resume hostilities in 14 days if the Federal Government disregarded its five-point demand, including inauguration of a panel to negotiate with the Pan Niger Delta Forum, PANDEF.
NDRC in a statement made available to the media by its spokesperson, WOI Izon-Ebi said: “After 14 days, if these very important concerns are not addressed, we shall have no choice but to call off our ceasefire and start hostilities because we only respected the plea of our eminent royal fathers, chiefs and leaders of the Niger Delta region to give room for sincere dialogue in finding a lasting solution to the Niger Delta question.

“Oloibiri should be a priority of development like the Federal Capital Territory because that is the first place oil was discovered in commercial quantity in 1959, but after sucking the oil dry, the community called Oloibiri is in shambles. No Niger Delta youth of this 21st century that happens to visit Oloibiri would accept the current reality of things in the Niger Delta.

“The Vice President that is saddled with the affairs of the Niger Delta should immediately call SPDC to order as it would annoy you to note how SPDC is enslaving Odoh family (the host family to Opomu West drilling location, since 1971 to date, a dime has not been given to the owners of the land for the destruction of their ancestral fishing lake).

“This issue should be addressed immediately as Akologben, Brass creek manifold and Benisede/Akonu/Tunu gas pipeline would be our first casualty.

“It will not be accepted any more where they are now subjected to raising their hands before getting to their community. How can the federal government justify the presence of four military house boats surrounding Oporoza, the traditional headquarters of Gbaramatu kingdom? Army houseboats, Navy houseboats, Air force houseboats and Joint Task Force houseboats. The federal government should immediately withdraw all military personnel and houseboats from Gbaramatu kingdom.

“The lack of funds to properly address and implement the Presidential Amnesty Programme, PAP, which has seen amnesty beneficiaries sent back from their various institutions of study overseas would not be accepted any longer.”

The agitators noted that they had tremendous respect for the “Chairman of the Federal Government’s delegation, who happens to be a pastor, professor of law and Vice President of Nigeria, Prof Yemi Osinbanjo. His truthfulness to have accepted the true reality of the plight of the Niger Deltans makes us to respect our ceasefire, but we have come to realize that the Federal Government is not sincere.

“The UNEP report implementation was just a ploy to persuade the people of Ogoni and to fool the international community that the Federal Government is fully committed to solving the Niger Delta question, their main aim is to suck the oil dry as was done in Oloibiri.

“The Niger Delta Revolutionary Crusaders and these 21st century agitators will make sure that all oil wells are shut down as was done in Ogoni land.

“We urge the Vice President, Prof. Yemi Osinbajo, who is now saddled with the affairs of the Niger Delta to use his integrity as a true leader to save this situation because the Niger Delta youths of this 21st century would no longer be fooled anymore.”