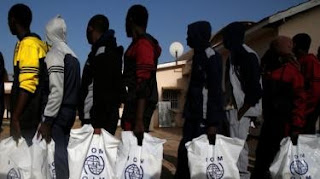 Gambian returnee Buba Fabareh was one of 169 migrants to be repatriated from Libya on April 4th this year. He was caught by police in Tripoli and returned to the International Organization for Migration (IOM) who helped him go back home.


But before Tripoli he was stuck like thousands of other West Africans in Libya’s Sabha city where migrants hoping for a better future in Europe are sold, tortured and turned into slaves in a lawless and place held by Libyan militia they call ‘guntown’.

It begins on the journey itself. After paying smuggling agents to organise their trip to Tripoli in Libya to take a boat to Europe, the migrants travel through several countries to Agadez, for a long time the migrant launch pad in Niger.

Some pay the agents in Agadez others in their home country but either way, the journey is paid to agents before they cross into Libya.

Along the way, they are stopped at checkpoints where officials and some less official men take more cash from them in Mali, Burkina Faso, Niger and Libya.

At the final checkpoint, the entrance to Sabha, all the money they have left is usually stripped away.

Agents pay the drivers once they arrive. If they don’t get paid, the migrants said, the drivers will sometimes sell the migrants to local gangsters called ‘asma boys’ who jail them and demand repayment with interest.