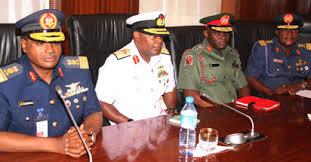 President Muhammadu Buhari on Monday approved the appointments of new service chiefs and National Security Adviser for the country.
Their appointments, which was contained in a statement by the Special Adviser to the President on Media and Publicity, Mr. Femi Adesina, followed Buhari’s sacking of the former occupants of the offices earlier in the day.


The new appointments, according to the statement are:

The new Chief of Defence Staff, Olonishakin (N/6901) hails from Ekiti State.
Until his new appointment, he was the Head of the Nigerian Army Training and Doctrine Command in Minna, Niger State.
The new Chief of Army Staff, Buratai hails from Borno State.
He was, until his new appointment, the Commander of the Multinational Joint Task Force which has its headquarters in Ndjamena.

Adesina said the new service chiefs will hold their appointments in an acting capacity until confirmed by the Senate.

He quoted the President as thanking the outgoing Service Chiefs and National Security Adviser for their services to the nation and wished them well in their future endeavours.