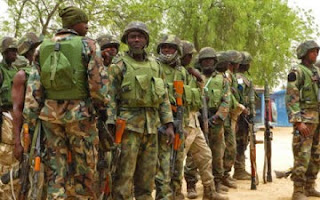 A team of the Transmission Company of Nigeria (TCN) accompanied by military escort who were on a mission to repair broken transmission line near Benesheikh along Maiduguri/Damaturu road were shot by soldiers, leading to the death of one of the TCN staff members, while two soldiers who were escorting them and another staff of TCN sustained injuries.
The incident happened on Sunday when soldiers stationed in Benesheikh to check the activities of Boko Haram who took over the Maiduguri/Damaturu road on Friday and Saturday slaughtering 11 people thought that the TCN staff and military escorts were members of the Boko Haram as no Communication was put through to the soldiers as regards to broken transmission line before the TCN staff set out for repair work.

A staff member of TCN, Ibrahim Garba, told Tribune Online that the situation could have been averted if the soldiers were informed. "That is the danger of working in a volatile area like Borno. One of our drivers is still missing while one of the injured staff and the two soldiers are receiving treatment at the General Hospital," he said.

Some weeks ago, five soldiers were also killed along Maiduguri/Damboa road on similar mission.