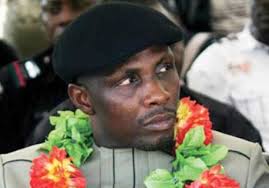 
In 2011, President Jonathan awarded a contract to provide security along Nigeria’s maritime borders to Global West Vessel Specialists Nigeria, a company owned by Tompolo. Seen as a political gesture, President Buhari has instructed the Nigerian Maritime Administration and Safety Agency (Nimasa) to discontinue payments for the provision of platforms for security.   With the revocation of the contract, money paid to the private firm will now be channelled to the Nigerian Navy and marine police to secure the nation’s waterways. According to a source at the Federal Ministry of Transport, the $103m (N21bn) maritime security contract was approved by former President Jonathan and awarded by Nimasa in 2011, shortly after Patrick Akpobolokemi, was appointed to head the agency.

It is believed that payments have been stopped since June, with Mohammed Bashir, the permanent secretary in the transport ministry directing Mr Akpobolokemi to halt payments for the controversial maritime security contract until further notice. Others who benefitted from similar contracts include Mujaheedin Asari-Dokubo and Chief Bipobiri Ajube, Alias General Shoot-At-Sight, as well as Odua People’s Congress founder Dr Frederick Fasheun and the leader of its other faction Otunba Gani Adams.   According to the transport ministry source: “It is difficult to believe that former President Goodluck Jonathan would hand out the security of the nation’s entire maritime domain to his kinsman under the guise of public-private partnership. It was certain that such a contract would not stand the test of time and like the pipeline security contracts awarded by the same regime, its time is over.”

However, former senior special assistant to the president on maritime, Leke Oyewole, advised the federal government not to go back to the old ways when Nimasa was handling water security. He noted that ever since Tompolo’s company was put in charge of providing platforms for security on the nation’s waters, there had been an improvement.

Last month, pioneer Nimasa chairman Alhaji Tijjani Ramalan, alleged that Tompolo’s company was paid N1.5bn monthly to execute the contract. He lamented that despite the huge payment, the country is still losing more than 400,000 barrels of crude oil daily to oil thieves.