DSS Allowed Back Into Aso Rock After Heated Arguments 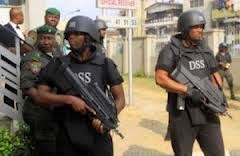 PERSONNEL of the Directorate of State Services (DSS) and men of the Directorate of Military Intelligence (DMI) posted to the Presidential Villa, Abuja, to protect President Muhammadu Buhari nearly exchanged blows on Monday at the Presidential Villa as the DSS personnel attempted to gain access into the offices.
Personnel of the DSS who had reported for work in the morning were prevented from passing through the front entrance of the premises by the DMI men manning the point.


When DSS men insisted that they would go in to report at their duty posts, there was a heated argument which nearly led to exchange of fisticuffs.

It was learnt that the news of the encounter reached the Aide de Camp (ADC) to the president, Lieutenant Colonel Mohammed Abubakar, who then came to resolve the differences between men of the two agencies and subsequently allowed in the DSS personnel.

Tribune Online, however, learnt that though Monday's incident was apparently taken care of, it may just be only temporarily as the conflict between the two agencies over the close protection of the president has not been put to rest.

Problem arose between the two agencies when Lt. Col. Abubakar, in a recent memo, barred DSS personnel from locations inside the Presidential Villa, arguing that the armed forces and the police, trained as Presidential Body Guards (PBGs), were to “provide close/immediate protection for the president henceforth."

Abubakar added that the personnel of the DSS would however man other duty beats/locations located within the immediate outer perimeter of the Presidential Villa alongside other security forces.
This instruction did not go down well with the Chief Security Officer (CSO) to the president, Abdulrahman Mani, who himself is of the DSS.

Mani therefore issued a counter circular in which he directed the DSS personnel to disregard the order of the ADC, saying that the relevant statutes give DSS the responsibility of close protection for the president.

The CSO had argued: “Though further actions have been initiated in this regard, including routine redeployment of close bodyguards out of the villa, and deployment of new ones, it is important to state that the duties hitherto performed by the personnel of the DSS (SSS) in the Presidential Villa and/or any other Key Vulnerable Points (KVPs) are backed by relevant statutes and gazetted instruments of the Federal Republic of Nigeria.

“Among others, these roles include close body protection of the president in line with standard operational procedures and international best practices.

“For the avoidance of doubt, Section 2 (1) (ii) of Instrument No. SSS 1 of 23rd May, 1999, made pursuant to Section 6 of the National Security Agencies (NSA) decree of 1986 which has been re-enacted as Section 6 of NSA Act CAP N74 LFN 2004, empowers personnel of the DSS to provide protective security for designated principal government functionaries including, but not limited to the president and vice president as well as members of their immediate families.

“It also mandates the DSS to provide protective security for sensitive installations such as the Presidential Villa and visiting foreign dignitaries. For this reason, personnel of the DSS who are on this schedule are carefully selected and properly trained both locally and abroad. Furthermore, continued background checks are maintained on them to confirm suitability and loyalty.

“In fact, the issues raised in the aforementioned circular tend to suggest that the author may have ventured into a not-too-familiar terrain. The extant practice, the world over, is that VIP protection, which is a specialised field, is usually handled by the Secret Service, under whatever nomenclature. They usually constitute the inner core security ring around every principal. The police and the military by training and mandate, are often required to provide secondary and tertiary cordons around venues and routes.

“However, all over other security agencies including the army, the police and others have their roles to play. It is on this note that heads of all security agencies currently in the Presidential Villa and their subordinates are enjoined to key into the existing command and control structure. They are to work in harmony with each other in full and strict compliance with the demands of their statutory prescribed responsibilities."

Source:
Tribune Newspaper
Posted by Don Okereke at 8:21:00 am