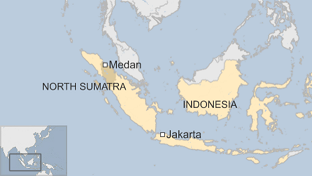 A military transport plane has crashed in a residential neighbourhood of the Indonesian city of Medan in northern Sumatra, officials say.


Local TV reported that the Hercules crashed into two houses and a car and burst into flames.

Military spokesman Fuad Basya told the BBC that the plane came down soon after take-off and that there were at least 12 crew members on board.
He said that it was not clear how many people had died.

A major rescue operation is under way at the crash site which is still covered in flames and thick black smoke.
Posted by Don Okereke at 8:17:00 am