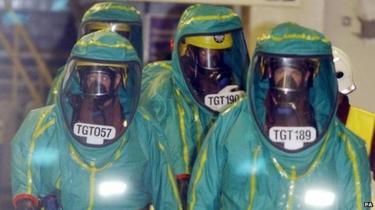 
The simulation of a terror attack has been six months in the planning.
The exercise - codenamed Strong Tower - involves 1,000 police officers at locations across the capital until Wednesday afternoon.

It comes days after 38 people were killed by a gunman in Tunisia, the majority of them British holidaymakers.

The Metropolitan Police says this week's exercise in London is not based on any specific intelligence and is part of a long-term strategy of planning and preparing for all possible types of terror attack.

'Train and learn'
Scotland Yard began planning the two-day event in January and only a dozen people know the full script to ensure that the officers and other services taking part face the maximum challenge.

Senior officers say that while much of the exercise will be hidden from view, there may be occasions when the public hear loud noises or see areas being cordoned off. Scotland Yard will be posting updates about the exercise to Twitter, using the hashtag #999exercise.

Sir Bernard said the threat level for terrorism had been raised over the last year, making it vital "that we train and we learn".

He said: "The reason we have exercises like today is because, obviously, we are concerned there are people planning terrorist events. We intend first of all to stop them from getting to attack. But should we not stop the terrorists in their planning, it's essential we disrupt them in any of the attacks that may take place."

Ch Supt Paul Rickett told the BBC it was "incredibly important" that the emergency services were prepared for this type of scenario.

"Events have told us around the world that the last thing you can be is complacent, so that is why it is important we continually respond to the emerging threat, change our tactics and we test our capability and readiness to respond," he said.

Although the nature of this "live play" exercise sounds similar to the attack in Tunisia, this event has been six months in the planning and is part of a regular programme.

The officers who came on shift this morning knew they were taking part in an exercise - but nothing about what they would be facing. Not even the "gold commander", the senior officer making the big decisions in the operations room, will know what's going to happen.

The exercise is influenced by what happened during two incidents: the Charlie Hebdo attack in Paris and the cafe siege in Sydney.

Scotland Yard stresses that whatever happens during this exercise, it doesn't mean they have specific intelligence that such an event could occur. But they do want to ensure they have planned for every conceivable type of incident in case it should ever come to pass.

'Extreme end'
Deputy Assistant Commissioner Maxine de Brunner, the exercise's director, said the aim was to test and challenge police and other agencies in an ambitious multi-site marauding terrorist attack.
"This exercise will be an on-going fast-paced terrorist situation and we will explore how we as London's agencies respond," said DAC de Brunner.

"The exercise is at the extreme end of what might happen. We're doing this so that if the very worst happens we are prepared to do our very best. It's only through carrying out thorough exercises and challenging out assumptions can we be confident in dealing with different scenarios.

"We have not put together an exercise of this magnitude before - officers will not have come across anything like this before.

Legal duty
"It is about making sure we have the capability and skills for anything that terrorists could throw at us."
Emergency services are under a legal duty to test their preparedness for all manner of crises from terrorism attacks to flooding.

Many counter-terrorism training exercises take place out of view around the country and the last comparable exercise of this nature was in London was in 2012.

In that exercise, the Metropolitan Police and others tested how they would respond to an attack on the London Underground involving a possible radiological or chemical device.

While Tuesday and Wednesday's exercise is likely to involve comparable numbers of people, it has been designed to stretch them much further by moving the incident around the city - although nobody other than the directors know exactly what is going to happen.

The agencies involved in the operation include the police, London Fire Brigade, London Ambulance Service, Transport For London, the NHS and a string of government departments who will face tests of their decision-making and crisis-management skills.