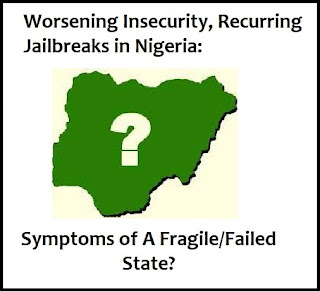 A Recap of The Security Dynamics in Nigeria: The 2021 Fragile States Index (FSI) ranks Nigeria as the 12th 'most fragile state in the world' out of the 179 countries appraised. Recall that Nigeria occupied the 14th position in 2020. Put this statistically, in 2020, the fragile states index (FSI) for Nigeria was 97.27. It increased from 94.4 index in 2006 to 97.27 index in 2020, growing at an average annual rate of 0.23%. According to the Fragile States Index powered by the United states-based Fund For peace, State fragility manifests itself in various ways such as: ‘’The loss of physical control of its territory or a monopoly on the legitimate use of force; The erosion of legitimate authority to make collective decisions; An inability to provide reasonable public services; The inability to interact with other states as a full member of the international community’’. The Borno State governor, Professor Babagana Zulum reportedly asserted recently that Nigeria is ranked 146 out of 166 crisis-stricken nations’ ranking on kidnapping, banditry, and forms of criminalities.

On the flip side, a 'failed state' is a country whose government has become incapable of providing the basic functions and responsibilities of a sovereign nation, such as military defense, law enforcement, justice, education, or economic stability. Common characteristics of failed states include ongoing civil violence, corruption, crime, poverty, illiteracy, and crumbling infrastructure. Even if a state is functioning properly, it can fail if it loses credibility and the trust of the people. If we agree with the trite saying that the primary responsibility of any government is to guarantee the security and lives of its citizens and to protect them from the worst vicissitudes of life, do we need further evidence that Nigeria does not have monopoly on the use of force or bereft of physical control of its territory?  A mid-year report by Washington DC-based human rights organization, Global Rights which tracks daily incidents of violent crimes, revealed that no fewer than 3,868 persons were killed in Nigeria between January and June 2021. The Global Rights group also inferred that 3,016 persons were abducted within the timeframe, a 79.6 percent increase compared to 615 incidents recorded within the same period in 2020.

On The Permeating Security Challenges in Nigeria

In August 2021, armed men reportedly attacked the Nigerian Defense Academy (NDA) in Kaduna State, killing two officers and abducting a third. The Nigerian Defence Academy is the citadel of learning where military officers, including those from neighbouring African countries are trained. Premium Times Newspaper headline of November 14, 2021 reads, ''two generals, 70 others killed in Nigeria last week as insecurity worsens''. According to the online newspaper, ‘’as the security challenges in Nigeria persist, at least 72 persons were killed last week (November 7-13) by non-state actors across the country. The figure consists of at least 12 security personnel including a serving brigadier general  Dzarma Zirkusu, and three soldiers who were killed in a fierce encounter with ISWAP terrorists at Askira Uba LGA of Borno State’’. Similarly, a retired Airforce officer, Air Vice Marshal Muhammed Maisaka, was reportedly murdered in Kaduna.

Boko Haram's faction reportedly collected taxes, mounted roadblocks, carried out search operations and provided certain incentives and financial and material support in Northeast Nigeria. Similarly, bandits imposed taxes on farmers in Niger, Katsina, Zamfara states and other parts of the country. The former United States Ambassador to Nigeria, John Campbell, and a former Director with Harvard University’s Kennedy School of Government, Prof. Robert Rotberg, are of the opinion that it is high time the United States to acknowledged Nigeria as a failed state in light of the many security threats plaguing the country. Despite evidence to the contrary, spin doctors and apologists, mostly in the corridors of power, claim otherwise. Nigeria's Minister of Information and Culture, Lai Mohammed says Nigeria cannot be described as a failed state, insisting that the country is only witnessing insecurity in some parts. Nigeria's Inspector General of Police, Usman Alkali, is another idealist. He recently opined that not only was the security situation in Nigeria getting better, but that the existing cases of insecurity were “isolated cases of crime and threats to public safety, peace and security in some parts of the country.” His statement came the same week that at least 40 people including three police officers were killed by armed non-state actors.

Out of the 50,992 inmates in Nigeria, representing 74 per cent of the total population of inmates in Nigeria’s custodial centres, are awaiting-trial inmates while only 17,755 inmates, which is mere 26 per cent, are actual convicts. The Minister of Interior, Ogbeni Rauf Aregbesola, said that 4,369 inmates escaped from custodial centres since 2020. He said while 984 were recaptured, 3,906 inmates were still missing. Nigeria has witnessed no fewer than 14 successful or attempted jailbreaks in the past ten years. Noteworthy incidents include:

§  28 November 2021, Jos prison attack. Bandits at about 17H20, invaded the Jos Correctional Centre, a prison yard situated in the heart of Jos City, not far from the police headquarters, Plateau State. This is the latest attack on a prison facility but will not be the last. Just like how kidnapping metamorphosed in Nigeria, the seed of jailbreaks has been sowed and criminals are taking notes. The Nigerian Correctional Service (NCoS) confirmed that 10 persons were killed, and 252 inmates escaped during the attack by gunmen on Sunday on the Jos Medium Security Custodial Centre. Prior to the attack, the Jos Medium Security Custodial Centre had 1,060 inmates constituting 560 pre-trial detainees and 500 convicts.

§  22 October 2021, Oyo prison break. Gunmen invaded the Abolongo Correctional Centre in Oyo Town at about 21H30 after using dynamite to blast the wall. Curiously, the invaders did not attack convicted inmates in the prison, 64 in total. This gives a huge clue: the attackers had a target to set free some of their confederates, who had been arrested for crimes and kept in the Abolongo custodial centre. Aftermath of this jailbreak.

§  September 12, 2021, Kogi prison break. At least 240 inmates escaped the Medium Security Custodial Centre (MSCC) in Kabba/Bunu LGA of Kogi State, following an attack by yet to be identified gunmen. The gunmen used explosives to destroy three sides of the perimeter fence, killed a soldier and a policeman during the attack and thereafter set the prisoners free. This is the second attack on the Kogi prison facility.

§  October 22, 2020, attempted jailbreak at Ikoyi prison. No fewer than 10 lives were reportedly lost, while more than 30 sustained gunshot injuries when inmates at the Ikoyi Custodial Centre in Lagos attempted to take advantage of the #EndSARS protests and the curfew in Lagos to escape. However, military men, who were mobilized to the scene, foiled the attempt.

§  October 19, 2020, Edo prisons break. A group of people under the guise of ENDSARs protesters, attacked the prisons in Benin City and Oko in Edo State freeing about 1,993 inmates.

§  June 24, 2016, Kuje prisons break. There was a jailbreak at the Kuje Medium Security Prisons  in the Federal Capital Territory. Two high profile inmates – Solomon Amodu and Maxwell Ajukwu reportedly escaped   through the fence. On 29 August 2016, there was another  attempted jailbreak at the same facility.

§  December 6, 2014,  Minna prisons break. The  Minna Medium Prisons was attacked by three  gunmen suspected to be armed robbers. About   270 prisoners  escaped. One security officer was  injured.

§  November 2014, Kogi prisons break. There was a breach at the  Federal Medium Security Prisons in Koto-Karffi,  Kogi State. The attackers were believed to be Boko Haram members.  About 144 inmates escaped while one was  killed.

§  November 30, 2014, Ekiti prisons break. There was an attack on the  Federal Prisons at Ado Ekiti, Ekiti State. The incident led to the escape of 341 inmates and death of  one prison official.

§  October 10, 2014, Lagos prisons break. There was  an unsuccessful   break at the Kirikiri Medium Prisons in Lagos State. The  incident left 20 inmates dead; 80 others injured while twelve escaped.

§  June 30, 2013, Ondo prisons break. The Olokuta Medium Security Prisons in Akure,  Ondo State was   attacked by 50 gunmen. No fewer than 175 inmates escaped. Two  were killed  and one  was injured.

§  September 7, 2010, Bauchi prison break. More than 50 gunmen suspected to be members of Boko Haram. attacked the Bauchi Prisons. About  721 inmates reportedly escaped while  five were killed  and six injured.

Solutions To prison breaks in Nigeria:

2.      There’s need for a biometric database of convicted criminals searchable in real-time. It is cheering news that the Nigerian Correctional Services is pursuing this line of action.

3.      Urgent need for random vulnerability and risk assessment of all correctional facilities in nigeria.

4.      Installation of state-of-the-art security gadgets such as solar powered (in the absence of regular electricity) CCTV cameras at prison facilities.

5.      Overhauling the Nigerian judicial system that will lead to the speedy trials and delivery of judgments in all cases. It is unfortunate that majority of prison inmates in Nigeria are awaiting trial.

6.      Reformation, rehabilitation, and reintegration of prisoners before they are freed will reduce the tendency for recidivism. Going to prison is not a death sentence.  Nigeria should take a cue from the Norwegian Prison System which is structured to ensure rehabilitation and reformation of offenders.

If the frequency and trend in prison breaks in nigeria is not a threat to national security in Nigeria, one wonders what is. The idea that nearly 4,000 prisoners, some of them convicted murderers, are silhouetted amongst Nigerians, is effing mindboggling and scary. Though there’s paucity of reliable data on criminal recidivism in Nigeria, Soyombo (2009) reported that the rate of occurrence of criminal recidivism in Nigeria in 2005 was 37.3%. Similarly, Abrifor et al. (2010) estimated the prevalence of recidivism in Nigerian prisons at 52.4% in 2010. A report on trend and pattern of recidivism shows that 81% of male criminal inmate offenders and 45% of female criminal inmate offenders were re-arrested within 36 months of discharge/release from the prison custody (Wilson, 2009 and Abrifor et al., 2010). Given the high rate of criminal recidivism in Nigeria, the lack of ‘safety net’ and high rate of unemployment, Nigeria’s stick-in-the-mud justice system, prison congestion and jailbreaks will not peter out anytime soon in Nigeria. While we don’t wish it to happen, if the security trend in Nigeria is anything to go by, it is only a matter of time before another prison break or an embarrassing assault on Nigeria’s national security infrastructure is re-enacted. As is always the case prior to elections, the political entropy and the security situation in Nigeria will likely nosedive as the 2023 general elections approaches. Whether you agree or disagree with the notion that Nigeria is oscillating between a fragile, failing or a failed state, the home truth and takeaway is that inter-alia, the Nigerian security, and intelligence agencies are overwhelmed and the current security situation in Nigeria is unprecedented, unpredictable, and may not improve anytime soon. This was re-echoed by the Taraba state governor, Darius Ishaku, who admitted while appearing as a guest on Channels Television’s Politics Today, that the 36 governors in Nigeria are helpless when it comes to tackling insecurity. If the Chief Security Officers of the 36 states in Nigeria are lost, imagine the fate of the common man.

Let's continue to be vigilant and situationally aware!