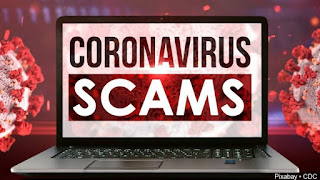 The International Criminal Police Organization (INTERPOL) has announced it uncovered a sophisticated COVID-19 face masks fraud scheme with the proceed destined for a Nigerian account. INTERPOL in a press statement on Tuesday elucidating the scheme said in mid-March, German health authorities contracted two sales companies in Zurich and Hamburg to procure EUR 15 million (about N6.3billion) worth of face masks.


This was part of Germany’s effort to curb the spread of the coronavirus disease (COVID-19). The nation, as of April 15th, 2020 recorded 132,210 confirmed cases of the virus with 3,495 deaths. The whole scheme started with an email address and website linked to a legitimate company in Spain selling face masks, according to the INTERPOL narration.

“Through email correspondence, the company initially claimed to have 10 million masks, only for the delivery to fall through. As consolation, they then referred the buyers to a ‘trusted’ dealer in Ireland. The Irish middleman promised to put them in touch with a different supplier, this time in the Netherlands.”

The new supplier in Netherland according to the scammer was capable of supplying the needed 10 million face masks but will need an upfront payment of EUR 1.5 million (about N631,210,863) for an initial delivery of 1.5 million.

“The buyers initiated a bank transfer to Ireland and prepared for delivery, which involved 52 lorries and a police escort to transport the masks from a warehouse in the Netherlands to the final destination in Germany. “Just before the delivery date, the buyers were informed that the funds had not been received and that an emergency transfer of EUR 880,000 [about N370.4 million] straight to the Dutch supplier was required to secure the merchandise,” INTERPOL recalled.

Sensing something fishy, the buyers immediately contacted their bank in Germany which relayed the development to the INTERPOL’s Financial Crimes Unit. INTERPOL in the chase for the money engaged “banks, financial intelligence units, and judicial authorities, as well as partner organizations Europol and EUROJUST”. “INTERPOL contacted its National Central Bureau in Dublin as well as the Irish bank. Prompt intervention by the Garda National Economic Crime Bureau allowed them to freeze the 1.5 million in the account and identify the Irish company involved.”

The Dutch Fiscal Information and Investigation Service tracked down the EUR 880,000 transferred from the German company. Of the total sum, nearly EUR 500,000 of those funds had already been sent to the United Kingdom (UK) and destined to be credited to an account in Nigeria.

“They adapted their sales pitches to take advantage of strained supply chains and generate huge profits. I can only salute the quick work of both the private and public authorities involved. INTERPOL will continue its work on the case – and the many others like it – in close cooperation with all of our partners,” INTERPOL Chief stated. Two suspects according to INTERPOL has been arrested in the Netherland while more arrests are likely as the investigation proceeds.