How Trafficked Nigerians Fall Victims Of Organ Harvest In Europe 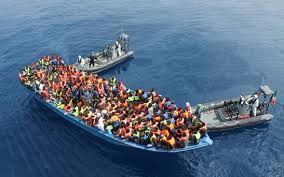 With the targeted airstrike at a migrants’ camp in Libya, it is clear the migrant crises is taking a new dimension. A good number of the victims are Nigerians but before that, Nigerian migrants trying to reach Europe have for long been falling victims to organ harvesting as our correspondent reports.


As at June 20, 2019, no fewer than 14,036 Nigerians stranded in 10 countries have been repatriated, according to figures by the National Emergency Management Agency (NEMA).

Over 12,000 of the returnees came from Libya, the restive North African country.

The repatriation, started in April 2017, was facilitated by a joint initiative of the European Union (EU) and International Organization for Migration (IOM). Many Nigerians use Libya and other countries along the Sahara Desert as a transit route to Europe.

Despite the daily repatriation, thousands of Nigerians are still stranded in the war-torn country, hoping to make the crossing to Europe.

Another report says in 2016, 602,000 Nigerians attempted to migrate to Europe. In the same year, Nigerians formed about 21 percent of the total 181,000 migrants who crossed the Mediterranean Sea to Italy.
In several failed attempts, many Nigerians are held in various detention facilities in Libya. Even for those who succeeded most of them were bundled to prison by Italian authorities, at least 70,000 of these are women in detention camps.

Stemming the tide has never been easy and people from the private sector, civil society, public sector, development agencies, and the religious community convened an international conference to deliberate and proffer solutions to the challenges.

Tagged, “International Action on Illegal Migration and Trafficking in Persons Conference”, the forum held in Abuja drew participants from international and local agencies working on human trafficking and irregular migration. It was organised by the Nigerian Young Professionals’ Forum (NYPF).

The forum provided an avenue for all participants to brainstorm on the scary stories from Libya, the actors involved, the geographical spread.

Chairman, NYPF, Mr. Moses Siasia, narrated how he first came across the idea of organizing a conference like that.

“I took an UBER to an embassy and was discussing on the phone. On our way, the taxi driver told me that he is a graduate who wants to travel to America,” he said. “He claimed to have saved N1.5 million, pleading that I should assist him with N1million.

I advised him against travelling, but he insisted, saying he would earn $1,000 monthly as an UBER driver in the US,” Siasia said.

He lamented that stories like that are not uncommon and a good number of them are being trafficked for sexual exploitation and organ harvesting.

“Most of the youths are between 18 and 25. They embark on these trips without knowing the dangers ahead. They are deceived and in the process, their organs are harvested. Some organs are sold for as high as N250,000. For instance, one harvested heart sells for N250,000,” he added.

Deputy Head of EU Delegation in Nigeria, Mr. Richard Young called for a concerted and urgent measure from Nigeria to arrest the alarming situation.

“One in every 10 illegal immigrants who entered Europe between 2015 and 2016 was a Nigerian. 20,532 persons entered Europe illegally in those years. 2,084 were Nigerians, representing 10 percent. There is a reduction in the figures of victims since 2016 but we have to be tough on the crime. There are the good, bad and ugly sides of migration. We have to promote the good, eliminate the bad and the ugly. This is a problem Nigeria needs to fight,” he said.

Director General of the National Agency for Prohibition of Trafficking in Persons (NAPTIP), Juli Okah-Donli, whose agency has had to grapple with the huge challenges, said many young Nigerians have fallen victims of drug traffickers.

Represented by the Head of Public Enlightenment of the agency, the DG disclosed that unlike in the recent past when Edo State was the source of most trafficked persons, Oyo and Osun states are now leading in trafficked persons.

He also mentioned that the number one destination for traffickers has also changed.

“Mali, which the traffickers named Maliasia, is now the number one destination for those trafficked into prostitution. Some of them, who we rescued, said they were paid an equivalent of N140 for a round of sex and they would have to be doing that until they realised the equivalent of N2 million to secure their freedom. Some of them were trafficked when they were 13,” he said.
He adds that some Nigerian migrants sell their ovaries to fertility clinics for N140,000.

Every December, the agency organises voluntary return for trafficked victims.

Ironically, some of the returnees only come back to recruit young women and men for the prostitution rackets or organ harvesters.

“NAPTIP has arrested 5,923 suspected human traffickers and rescued 13,950 victims in its 15 years of Existence,” the DG said.

Rev. Sr. Monica Chikwe, who is of the Hospitaler Sisters of Mercy and Religious in Europe Networking Against Trafficking and Exploitation (RENATE), also shared many heart-wrenching first-hand experiences with traffickers, their victims, and Italian farm owners, who exploit migrants.

The Italy-based nun said: “My job involves travelling around the world and most times, I feel ashamed hearing at conferences that Nigerians are most of the victims of human trafficking and sexual exploitation in Europe.

“The girls practice their prostitution on the roads and bushes along the roads. You will feel bad seeing these semi-Unclad girls standing on the highways as they market their bodies.”

“Many people talk about the victims and hardly talk about what makes the trade to flourish. The demand is driving the supply. That is why the trade is flourishing and the traffickers are becoming daring. I had once asked at a conference if Nigerians or other Africans are the ones patronising the Nigerian prostitutes in Europe. The patronage comes from those countries, not African countries,” she said.

Dr. Ahmed Adamu of the Nile University, who is a former Chairperson of the Commonwealth Youth Council, advocated for a repackaged educational curriculum that focuses on building mental energy.
“Nigeria has not moved with time. This is the time for the type of education that would equip the youths with mental tools to solve problems beyond what was learned in the classrooms,” he submitted.

On his part, the head of NYPF, Siasia called for the creation of an enabling environment capable of making traveling abroad unattractive to young people.

“As the NYPF, we are seeing opportunities in the face of challenges. Collective responsibility is required to combat the problem because people would always move from one place to another,” he added.