Geopolitics: How Russia Is Bolstering Its Strategic Influence In Africa 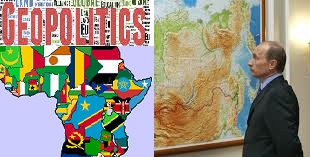 
There was a strong Russian influence in Africa during the heyday of the Soviet Union. The post-independence governments of Angola, Mozambique, Guinea-Bissau, Democratic Republic of Congo, Egypt, Somalia, Ethiopia, Uganda and Benin at some point all received diplomatic or military support from the Soviet Union.

But this began to change after the superpower started to collapse in December 1991. More than a quarter of a century later Russia’s President Vladimir Putin seems to have new aspirations in Africa. This is in line with his desire to restore Russia to great power status.

Putin places a high premium on geopolitical relations and the pursuit of Russian assertiveness in the global arena. This includes reestablishing Russia’s sphere of influence, which extends to the African continent.

Like Beijing, Moscow’s method of trade and investment in Africa is without the prescriptions or conditionalities of actors like the International Monetary Fund and the World Bank.

Russia is gradually increasing its influence in Africa through strategic investment in energy and minerals. It’s also using military muscle and soft power.

Increasingly, the pressing question is: is the relationship between China and Africa as good for Africa as it is for China? The same question applies to Russia-Africa relations.

Interaction between Russia and Africa has grown exponentially this century, with trade and investment growing by 185% between 2005 and 2015.

Economically, much of Russia’s focus in Africa centres on energy. Key Russian investments in Africa are in the oil, gas and nuclear power sectors.

The fact that 620 million people in Africa don’t have electricity provides Russia’s nuclear power industry with potential markets. Several Russian companies, such as Gazprom, Lukoil, Rostec and Rosatom are active in Africa. Most activity is in Algeria, Angola, Egypt, Nigeria and Uganda. In Egypt, negotiations have already been finalized with Moscow for the building of the country’s first nuclear plant .

These companies are mostly state-run, with investments often linked to military and diplomatic interests.

Moscow’s second area of interest is Africa’s mineral riches. This is particularly evident in Zimbabwe, Angola, the Democratic Republic of Congo, Namibia and the Central African Republic.

In Zimbabwe, Russia is developing one of the world’s largest deposits of platinum group metals.

Russia has also been reestablishing links with Angola, where Alrosa, the Russian giant, mines diamonds. Discussions between Russia and Angola have also focused on hydrocarbon production.Uranium in Namibia is another example.

Russia’s current controversial involvement in the Central African Republic (CAR) began in 2017, when a team of Russian military instructors and 170 “civilian advisers” were sent by Moscow to Bangui to train the country’s army and presidential guard. Shortly after that, nine weapons shipments arrived in the CAR.

Interest in the country has focused on exploring its natural resources on a concession basis. The murder of three Russian journalists in a remote area of the country last year focused the world’s attention on what looked like a Kremlin drive for influence and resources.

Russia is the second largest exporter of arms globally, and a major supplier to African states. Over the past two decades it has pursued military ties with various African countries, such as Ethiopia, Nigeria and Zimbabwe.

Military ties are linked to bilateral military agreements as well as providing boots on the ground in UN peacekeeping operations. Combined, China and Russia outnumber the other permanent members of the UN Security Council in contributing troop to UN peacekeeping efforts.

Russia has also been actively supporting Zimbabwe. Shortly after it was reported in 2018 that China had placed new generation surface-to-air missiles in Zimbabwe, Russian Foreign Minister Sergey Lavrov announced that his country was pursuing military cooperation.

Significantly, Zimbabwe’s President Emmerson Mnangagwa has said that his country may need Russia’s help with the modernisation of its defence force during a recent visit to Moscow.

Russia, Africa and the future

Both Russia and China are keen to play a future role in Africa. The difference between these two major powers is that China forms part of the Asian regional economy. This will surpass North America and Europe combined, in terms of global power – based on GDP, population size, military spending and technological investment.

China and India have sustained impressive economic growth over many years. And, their enormous populations make them two world powers of extraordinary importance. Growth prospects for the Russian economy, on the other hand, remain modest – between 1.5% and 1.8% a year for 2018-2010, against the current global average rate of 3.5% a year.

Still, Russia remains a major power in global politics. For African leaders, the key word is agency and the question is how to play the renewed Russian attention to their countries’ advantage, and not to fall victim to the contemporary “geopolitical chess” game played by the major powers on the continent.

Written By: Theo Neethling, University of the Free State