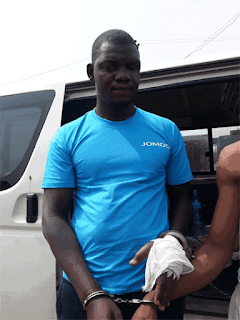 A notorious and wanted Boko Haram leader and alleged  mastermind of the Kuje and Nyanya, Abuja bombings , in 2015, Umar, has been arrested by operatives of the Inspector-General of Police Special Response Team, IRT in Lagos.


Umar, also alleged to be leader of a deadly robbery gang that has killed over 15 policemen at Galadimawa, Gwagwalada and Lugbe areas of Abuja, was arrested at a hideout in an undisclosed area of Lagos.

He was said to have fled Abuja, three weeks ago, with bullet wounds, during an encounter with IRT operatives.

However, at the end of the encounter four suspected members of his gang were arrested, with the recovery of four  AK 47 Rifles  and hundreds Of ammunitions.

IRT sources hinted that the suspect had been on their wanted list owing to several crimes he allegedly committed.

Sources said that the suspect was also the overall Commander of Edo and Ondo State Multiple Bank Robberies and had also masterminded several killings  in Okene Axis Of Kogi.

“He was the Grand Commander Of the  Attack and Rescue operations of the Prison in Niger State early this year, during which he lost one of his eyes. During the operation, over 100 prisoners escaped”, sources said..

His arrest sparked up celebration at the IRT offices in Abuja and Lagos, as he was described as  deadly.

An elated Commander, IRT, Abbah Kyari, a Deputy Commissioner of Police was quoted as saying ” Today is one of the happiest moments of my Life.  Kudos to Nigeria Police force, Kudos to IGP Ibrahim Idris, Kudos to IRT”.