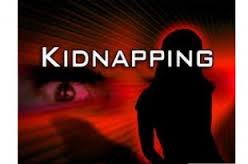 THE Nigerian Senate yesterday September 28, 2017, passed into law the kidnapping, abduction bill, specifying a 30-year jail term for anyone caught colluding with an abductor to receive ransom for any person wrongfully confined.


The passage of the bill followed a clause by clause consideration of the report by the lawmakers during plenary.

It would be recalled that the bill was sponsored by Senator Isa Misau, APC-Bauchi Central, and read for the first time on Tuesday, May 17, 2016.

While presenting the report, Utazi said the bill sought to prescribe stiff punishment for the offence of abduction, wrongful restraint and wrongful confinement for ransom.

He also said the bill sought to combat and prevent any form of kidnapping in Nigeria and that wider powers be given to the Inspector-General of Police to ensure adequate policing of the crime.

According to him, it was observed that the prevalence of crime of abduction, wrongful restraint and wrongful confinement for ransom has a debilitating effect on the nation’s economy by preventing foreign direct investment.

He added that the menace was capable of making foreigners uncomfortable to invest in the country for fear of being kidnapped and huge sums of money paid to secure their release.

He said the passage of the bill would undoubtedly address some of the inadequacies in Nigeria’s distinct  statutes such as  the Criminal Code Act and the Penal Code Act.

Prior to the passage of the bill, the Senate had dissolved into the committee of the whole for clause by clause consideration of the report of the Committee on Judiciary on the bill.

Clause 1 (3) of the Bill stated that “whoever is guilty of the offence and then results in the death of the victim shall be liable on conviction to be sentenced to death.”

Clause 5 (2) of the bill revealed that “anyone who fails to produce any book, account, receipts, vouchers or other documents which is in his possession or control shall be guilty of an offence.  The person shall be liable on conviction to a fine not exceeding N100,000 or to imprisonment for a term not exceeding one year or to both fine and imprisonment.”

Clause 3 provides a 30- year jail term for anyone who colludes with abductor to receive any ransom for the release of any person who has been wrongfully confined.