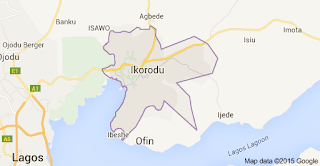 The community leaders of Gberigbe in the Ikorodu axis of Lagos have announced plans to commence the traditional ‘Oro’ in the community and its environs. The development is due to the alleged imminent invasion of the community by a notorious serial criminal and ritualist gang known as ‘’Badoo’’.


The ‘Oro’ according to the community leaders is to ward off the invasion by the fearless Badoo gang that have wreaked havoc in Ibeshe, Olu Odo, Ahmadiyya and other parts of Ikorodu in the past.

The planned curfew is scheduled to commence from today, Thursday, May 4 to Saturday, May 13, 2017 at Gberigbe community and its environs.

According to a message obtained by InsideMainland, the ‘Oro’ activity would hold at different times including day and night.

The message reads: “This is to inform the general public that the Gberigbe Community announces the commencement of “Oro” activity at Gberigbe and its environs from Thursday, May 4 to 13 2017 at different times both day light and nights. According to them, the activity is to ward off the imminent invasion of their Community by a syndicate popularly referred to as “BADOO”. Please be carefully if you must pass through the axis especially females.”

This planned curfew is coming weeks after the State Commissioner of Police, Fatai Owoseni alleged that monarchs in Ikorodu are rooted in a ‘conspiracy of silence’ over the continuous attacks in the community.
You would also recall that Governor Akinwunmi Ambode through the Hon. Muslim Folami, Commissioner Local Government and Community Affairs read a riot act to monarchs in the State.

Culled from: InsideMainland
Posted by Don Okereke at 7:24:00 am