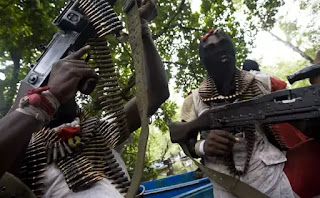 
The Lagos State Police Command on Thursday confirmed the killing of three of its officers and two community leaders by unidentified gunmen at Oko-Asagun village in Ibeju Lekki Local Government Area of Lagos.

The News Agency of Nigeria gathered that the gunmen also abducted four staff of two Telecommunication companies in the Wednesday attack.

He said the command was after the suspected gunmen, assuring that measures would be taken to ensure the release of those held captive.

The gunmen had stormed the place from Ode-Omi creek, a border town between Lagos and Ogun States, to commit the crime.

A witness, Jude Ajagun, said those abducted were staff of TYDACOM Limited and Erickson Limited.

“We were working in a site being developed by one Onoside, who contracted us.
“While on duty, we started hearing sporadic gunshots and we scampered for safety; I hid beside some blocks, while I was watching the scene.

“I saw about six heavily armed men; three were wearing mask and they sighted three policemen attached to an estate developer and shot them dead.

Two other civilians were also shot while four others were injured.

A staff of Ericson, who spoke on condition of anonymity, said they had been keeping vigil since Wednesday.

He said that as at Thursday, the gunmen were yet to establish contact with the company.
“We are expecting a call from them to know what they want as ransom, but they have not established contact with us.

“We are appealing to the kidnappers to tamper justice with mercy as those abducted are innocent.
“They should treat them with human face in the spirit of Easter,” he pleaded. (NAN).

The latest attack comes four days after the police confirmed the killing of four of its officers and an army captain in Ikorodu area of the state.

The Commissioner of Police in Lagos State, Fatai Owoseni, said the command was working with sister security agencies to arrest the suspected militants that killed the officials in Ikorodu.

Mr. Owoseni made the promise in a statement on Sunday while responding to the killings.
The commissioner said that the officers were killed while trying to rescue some people abducted by the unidentified gunmen.

“At about 1a.m of today Sunday April 9, the Police received distress call that a group of militants/kidnappers had entered Owutu-Isawo in Ikorodu through the thick swampy forest surrounding the area.

“They were reported to have kidnapped some residents. In response, the Police and the Army immediately mobilised personnel to the area, where the kidnapped victims were rescued.

“Sadly, however, five out of the gallant, brave and patriotic officers lost their lives during the rescue operation. One of them is a Nigerian Army Captain, while the remaining four are policemen. One of the residents in the area also died.

“We pray that the God Almighty reward their loyalty to the nation with paradise and grant their souls peaceful rest.

“We also pray that God gives their respective families the courage to bear the loss,” Mr. Owoseni said.

“The Command will like to assure the public that with synergy from sister security agencies, the criminal elements involved in this dastardly act shall be apprehended and made to face the full wrath of the law.

“We will continue to rely on the good people of Lagos State for useful information and their partnership,” he said.

The commissioner said that the officers were killed while trying to rescue some people abducted by the unidentified gunmen, stressing that one army Captain and a civilian were among the six persons killed.

Culled from: Premium Times
Posted by Don Okereke at 6:50:00 am