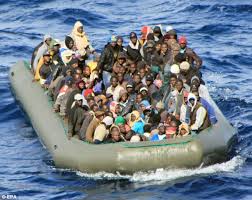 Africans desperate to reach Europe are being sold by their captors in "slave markets" in Libya, the International Organization for Migration (IOM) says.


Victims told IOM that after being detained by people smugglers or militia groups, they were taken to town squares or car parks to be sold.

Migrants with skills like painting or tiling would fetch higher prices, the head of the IOM in Libya told the BBC.
Libya has been in chaos since the 2011 Nato-backed ousting of Muammar Gaddafi.
Hundreds of young sub-Saharan African men have been caught up in the so-called slave markets, according to the IOM report.

A Senegalese migrant, who was not named to protect his identity, said that he had been sold at one such market in the southern Libyan city of Sabha, before being taken to a makeshift prison where more than 100 migrants were being held hostage.

He said that migrants held at the facility were told to call their families, who would be asked for money to pay for their release, and some were beaten while on the phone to allow relatives to hear them being tortured.

He described "dreadful" conditions where migrants were forced to survive on limited food supplies, with those unable to pay either killed or left to starve, the report adds.

Another witness, who was able to raise the funds needed for his release after nine months, was later taken to hospital with severe malnutrition, weighing just 5.5 stone (35 kg).

Women, too, were bought by private Libyan clients and brought to homes where they were forced to be sex slaves, the witness said.

The IOM's chief of mission for Libya, Othman Belbeisi, told the BBC that those sold into slavery found themselves priced according to their abilities.

"Apparently they don't have money and their families cannot pay the ransom, so they are being sold to get at least a minimum benefit from that," he said.

"The price is definitely different depending on your qualifications, for example if you can do painting or tiles or some specialised work then the price gets higher."

An IOM staff member in Niger said they confirmed the reports of auctions in Libya with several other migrants who had escaped.

"They all confirmed the risks of been sold as slaves in squares or garages in Sabha, either by their drivers or by locals who recruit the migrants for daily jobs in town, often in construction.
"Later, instead of paying them, [they] sell their victims to new buyers."

Some migrants, mainly Nigerians, Ghanaians and Gambians are forced to work "as guards in the ransom houses or in the 'market' itself", the IOM employee added.

The organisation has called the emergence of these markets "a disturbing new trend in the already dire situation for migrants in Libya".

The report, A Deadly Journey for Children, said that almost 26,000 children - most of them unaccompanied - crossed the Mediterranean in 2016, many of them suffering abuse at the hands of smugglers and traffickers.

Tens of thousands of migrants arrived in Italy last year by sea, crossing from North Africa. But before they reach the jumping-off point in Libya, many migrants will have undertaken a perilous journey of up to six days across the Sahara in extreme temperatures.