Herdsmen And Farmers Clash In Abia State, One Dead 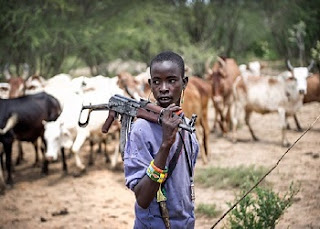 ONE person has been confirmed dead in Umuobasiukwu in Ozuitem, Bende Local Government Area of Abia State during a clash between herdsmen and farmers on Sunday. Crops, valued at millions of Naira, were also destroyed, even as it was also claimed that some cows were killed during the clash.
A detachment of regular and mobile policemen have been drafted to the community to maintain law and order.


Abia State Police Commissioner, Mr. Leye Oyebade, who confirmed the incident at a briefing yesterday in Umuahia, said that the situation had been brought under control. Umuobasiukwu and Ozuitem community has, in the last three months, witnessed three clashes between predominantly rural farmers in the community and herdsmen.

At a recent town hall meeting by the Minister of Information and Culture in Umuahia, the traditional ruler from one of the communities in Ozuitem complained about the activities of herdsmen in his community and urged the Federal and Abia State governments to urgently curtail it. In his remarks, the Chairman of Meyeti-Allah in the state, Hassan Buba, appealed to the herdsmen to embrace peace. and live in harmony with their host communities.

Also, the traditional ruler of the Umuobasiukwu community, Eze John Akarilo appealed to the aggrieved youths of the community to sheathe their sword and give peace a chance.

Culled from: Vanguard Newspaper
Posted by Don Okereke at 3:12:00 pm