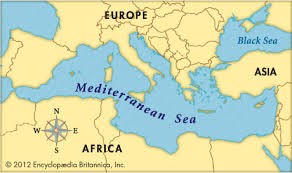 About 128 migrants, comprising Nigerians and other West Africans, died while crossing Mediterranean Sea to Europe between March 6 and 26, 2017.


The UN agency in a statement by its spokesman Flavio Di Giacomo, stated that the number made it 649 deaths recorded in the first 86 days of 2017. The IOM spokesperson said other nationals included Gambians, Ivorians, Ghanaians, Malians, Senegalese and Guineans (both Guinea-Bissau and Conakry).

Di Giacomo said the number was, however, lower compared with 163,895 recorded through the first 86 days of 2016. The spokesperson explained that 2,320 migrants were brought to land between March 23 and 24 in 2017. He added that another set of 1,160 migrants which did not include the number above were brought to land on March 25 and 26. He stated that one corpse was found on a dinghy, which was carrying 138 migrants.

Di Giacomo said Proactiva OpenArms, an NGO, retrieved the remains of five migrants from a capsized dinghy in addition to a sixth victim it retrieved near the original site of the shipwreck. According to him IOM believes the dinghy found by OpenArms is the same one that IOM Libya reported was rescued by Libyan fishermen who saved 54 people on 21 March. He said that the 54 survivors brought to Libya said that approximately 120 migrants were on board including six dead.

Di Giacomo said 66 victims remained unaccounted for in that tragedy. He further explained that a vessel “Iuventa” of the German CSO “Jugend Rettet” claimed it spotted another ship sinking six miles off the position of the “Golfo Azzurro.” The spokesperson stated that IOM had no further information about sinking vessel, adding that The Jugend Rettet was the vessel that retrieved the remains of the sixth victim.

“We are trying to understand whether the ship found by OpenArms is the same one that was rescued earlier this month by Libyan fishermen. “This may considerably change the number of missing migrants. For the moment, it is only possible to confirm that there are 66 victims,” Di Giacomo quoted Federico Soda, Director for IOM’s Mediterranean operations as saying.

According to him, this tragic event reminds us all of the massive loss of lives in the tragedies occurring on the central Mediterranean route where over 590 migrants died in 2017 alone. “That is 418 more than last year on this route during the same period. “In this context, the presence of many rescue ships at sea is crucial; without them, the number of fatalities would be inevitably higher”, he said.

Di Giacomo said IOM had received information about the remains of a 15-year old African girl retrieved from the shores of Sabratah by the Libyan Red Crescent. He said that puts the total confirmed dead found on Libyan beaches in 2017 at 164, of which 20 were retrieved in March. He added that the number rescued in 2017 by the Libyan Coast Guard and others were 3,457.

Culled from: Vanguard Newspaper
Posted by Don Okereke at 7:26:00 am