Why The Scourge of Kidnapping Persists in Nigeria 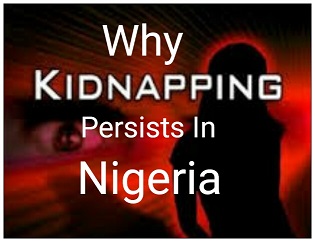 Kidnap for ransom and extortion (KRE) came to the fore in Nigeria when sometime in 2007, a total of 24 expatriates comprising 3 Koreans, 8 Filipinos, a Dutchman, amongst others were kidnapped in separate attacks in Nigeria's oil-producing Niger Delta region. On the night of 14-15 April 2014, Boko Haram upped the ante with the kidnapping of about 276 Chibok school girls from Government Secondary School, Chibok in Borno State. 21 of the abducted Chibok schoolgirls were freed by Boko Haram in October 2016 after negotiations were facilitated between the insurgent group and the Nigerian government by the Swiss government. Nigeria’s THISDAY newspaper says ‘’an authoritative presidency source informed it that Nigerian government was coerced to part with cash to get the 21 girls out’’. While we fixated on Boko Haram’s mass kidnappings of scores of women and girls, Small Wars Journal reckons Boko Haram kidnapped and co-opted more than 10, 000 boys.

While Mexico came tops followed by India, Pakistan and Iraq, Nigeria was ranked fifth in 2015 global abduction index published by Control Risk, a UK consultancy firm. Kidnapping incidents are generally underreported in Nigeria. There is paucity of reliable crime data in Nigeria but a guestimate by the Nigeria Police suggests there were 887 kidnapping incidents in Nigeria in 2015. Security agencies apparently go all out when a big-shot is kidnapped than when a Joe Bloggs is involved. For want of confidence in the security agencies, families of kidnapped victims will rather ‘play ball’, pay ransom than involve the security agencies.
Trend of Mass Kidnappings in Nigeria

Mass kidnapping is becoming a trend in Nigeria. Sometime in January 2017, two young ladies – Veronica Otogo, Bisola Mohammed and one Damilola Oribuyaku were reportedly kidnapped in Abuja, Nigeria’s capital. Their abductors are demanding $300,000 ransom. In 2016, seven expatriates were kidnapped in Calabar, Cross River State, South-South Nigeria and subsequently released after ransom payment. The Lagos-Ogun state axis in South-west Nigeria is also bedeviled with mass kidnapping of residents and students. Typical cases include the recent kidnapping of 3 landlords in Isheri area of Lagos State. Others include students of Babington Macaulay Junior Seminary, a model private missionary school in Ikorodu, students of Lagos State Model College, Igbo-Nla in Epe, both in Lagos state and the recent kidnapping of staff and students of the Nigerian Turkish International College, NTIC, located in Isheri North, Ogun State.
They were freed after ransom was paid. Three women were kidnapped in Kaduna State, North-Central Nigeria while three medical doctors were also kidnapped in Imo state, South-East Nigeria. Five children were kidnapped in Bauchi State while 5 Polish sailors were kidnapped off the coast of Nigeria.

Causes of kidnapping in Nigeria

Massive Unemployment: A report by Nigeria’s National Bureau of Statistics, NBS, asserts that unemployed Nigerians skyrocketed to a record 31 million as at September 2016. Some analysts believe that kidnapping basks on the high unemployment rate in Nigeria. Others factors that contribute to insecurity and kidnapping are: paucity of state-of-the-art equipment (forensic, intelligence gathering gadgets etc) for the security agencies and inherent reactive approach to crime fighting, lack of security awareness and consciousness on the part of the citizenry, impunity and a corrupt, slowpoke judiciary, amongst others. Talking about inefficient criminal justice system, an alleged notorious kidnap kingpin, militant leader cum founder of Liberation Movement of the Urhobo People, LIMUP reportedly responsible for the kidnapping of Chief Mike Ozekhome (SAN) and other high profile kidnappings, one Kelvin Oniarah Ezeigbe, alias Ibruvwe was arrested by security agents on 25 September, 2013 but his trial drags on till 2017, four years after his arrest. No guarantee his trial will be concluded in the next 6 years. Reminiscent of movie scenes or events in a failed state, on January 27, 2017, a daredevil criminal gang invaded Owerri High Court, South-East Nigeria, shot sporadically and whisked away their leader, a notorious kidnapper identified as Chibueze Henry alias "Vampire" or ‘’Onye Na Way Ya’’ who was standing trial. Vampires daring get away is not a one-off. Recall that few years ago, Kelvin Oniarah Ezeigbe (mentioned above) purportedly masterminded the escape of his men been escorted by Prison officials to stand trial.
Amnesty To Criminals in Nigeria, A Pat on The Back?

Recall that Imo, Rivers, and now Lagos State governors respectively offered amnesty to criminals, cultists in their domains. Criminals are more likely to recidivate - fall back to crime - when they waltz from breaking the law. I expounded the implications of amnesty and recidivism of criminals in Nigeria in one of my piece. The same Niger Delta blokes that the Yar Adua/Jonathan administration granted amnesty are the same people still blasting oil installations.  Same Boko Haram insurgents that parleyed, allegedly swapped prisoners with Nigerian government on the release of 21 abducted Chibok girls are the ones still causing mayhem. The seeming untouchability and larger-than-life disposition of outlaws in Nigeria emboldens their henchmen and other potential criminal elements. Perhaps we can take a cue from the United States. Former President Obama commuted the sentences of Ms. Chelsea Manning, a US Army intelligence analyst serving a 35-year sentence for leaking classified military information. All in all, Mr. Obama granted 64 pardons and 207 commutations. The aforementioned committed various crimes, they were tried, convicted, did time and later pardoned or had their sentences commuted. In Nigeria, the trend is to (un)wittingly encourage impunity by granting carte blanche amnesty to hardboiled criminals. As they say, if someone is ready to do the crime, s/he should also be prepared to do the time. Commutation, pardon or amnesty can come later, if need be.

Prevention they say, is better than cure. To rein in insecurity and criminal activities, the Nigerian government must tackle unprecedented proliferation of arms in the country. There’s urgent need to provide sophisticated gadgets to the security agencies, boost their morale and train them to be proactive rather than reactive. Nigeria urgently needs far-reaching reform of its criminal justice system to encourage quick dispensation of justice. Security and safety education and awareness must be ramped up. House owners, schools, public places and organizations must factor in ‘’Crime Prevention Through Environmental Design, CPTED, while designing and constructing their structures. CPTED is a proactive crime prevention concept that focuses on tactical design and effective use of the built environment to reduce or remove the preponderance for crime to occur in an environment. CPTED encompasses five principles: (a) physical security – fencing, CCTV cameras, lighting (b) surveillance – intelligence gathering, security guards (c) access or movement control - gates (d) management/maintenance and (e) defensible space. Government and regulatory agencies must ensure schools are not operated in make-shift apartments. Beware of ‘’insider threats’’. Some kidnapping incidents are engineered by domestic staff; ensure holistic security background checks while hiring such staff. You may wish to refer to 27 security, safety tips to prevent, survive a kidnapping incident for comprehensive anti-kidnapping tips.

Conclusion:
Kidnapping persists in Nigeria because of the penchant for treating the symptoms of a disease rather than addressing its root causes. An analogy suffices: if two motorcycles collide in an accident in Nigeria, the likely solution will be to ban the use of motorcycles. No effort is made to unravel and fix the remote and immediate causes. The security agencies must not be reactive, wait for kidnapping to occur, ransoms paid before entertaining the public with parade of suspects who were probably tortured into confessing to the crime. An Igbo proverb says, ‘’onaghi adi mma mmiri zoochaa, echenyewa oku’’. Rough English translation says, ‘’there’s no point bringing out kegs to fetch rain water after the rain must have ceased.