85 Nigerians To Be Deported From The United Kingdom Today 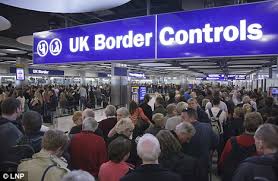 The National Emergency Management Agency, NEMA, says about 85 Nigerians were to be deported by the United Kingdom to Nigeria today.

Although we cannot tell the various offences, we believe others could be drug-related and immigration problems. “We expect that when they arrive in the country, we would be able to know the real reason for their deportation. The aircraft is expected to arrive in the country at 5am at the Murtala Muhammed International Airport.” He said

Culled from: Vanguard Newspaper
Posted by Don Okereke at 7:47:00 am

Email ThisBlogThis!Share to TwitterShare to FacebookShare to Pinterest
Labels: News, Nigeria, Nigerian prisoners in the UK