UPDATE: A professor of veterinary medicine, Prof. Mani is reported to be one of the victim's of the early morning bomb blast that rocked a mosque at the University of Maiduguri. Four other people were said to have lost their lives while twenty others sustained various degrees of injuries.

This attack bears the trademark of Boko Haram Sect which continues to launch blistering attacks on soft targets largely in Northeast Nigeria. 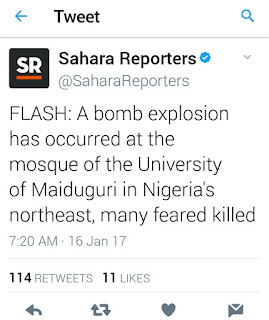