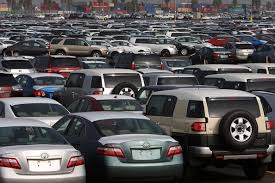 The federal government of Nigeria has prohibited the importation of vehicles, new and old, through land borders.


This was contained in a statement issued monday by the Nigeria Customs Service (NCS) Public Relations Officer, Mr. Wale Adeniyi.

The statement said there was a presidential directive restricting all vehicle imports to Nigeria Sea Ports only, adding that the order would take effect from January 1, 2017.

According to him, “The restriction on importation of vehicles follows that of Rice, whose imports have been banned through the land borders since April 2016.

“Importers of vehicles through the land borders are requested to utilise the grace period up till December 31, 2016 to clear their vehicle imports landed in neighbouring ports.”

The government may have, with this restriction, acceded to one of the requests made by Nigerian Automotive Manufacturers Association (NAMA) to ease their operations.

Last week, the Chairman, Mr. Tokunbo Aromolaran, said: “Manufacturing has been tough in this environment for the reason that specific attention has not been paid to our own peculiarities. All the people that we compete against operate in an environment that makes it easy for them to access the things they need to put together to add value to their various environment, but here, you have to build your own power station, roads, water system, coming through the port is a hell, inflation affects us too, at 21 per cent, and when you put all these together, the cost of production is naturally higher.”

Aromolaran, who is the Managing Director of VON Automobiles Limited, said if the government wants to encourage the auto sector then “there should be preferential policies to ensure that people, who are getting Nigerians employed and assisting to put food on the table in millions of homes, should be encouraged to grow and grow faster. When they get past that threshold, then they can compete with anybody. Now, we are not able to compete and that is why it is easier to import. For those who prefer to import, it is easy business. Nigerians are suffering; we are seeing people working in other countries while our own people are walking in the streets.”

He said if not that VON was strong enough, they would have been down-sizing by now because “there is no business. But we have taken a stance that we will keep our workers because we have spent millions training them and it does not make sense to invest in people and let them go.”

He said: “Right now, we are bleeding. That is why working in manufacturing in this country right now is not the best situation you can have. We are hoping that government looks at the policy again that surrounds manufacturing, let’s have some preferential interest rates, let’s look at the FX allocation to allocate to sectors that generate something back for the country. We spend a lot of money paying for invisibles, most of our dollars pay for things nobody sees, and if they are not there we wouldn’t miss a thing. But there are those things that add value to us and if we can look at our policies again and redirect them, Nigeria will be better for it.”

Aromolaran said the preferential duties given to auto manufacturers through the Auto Policy should be improved upon, explaining that “for those of us who assemble either from completely knock down or semi knock down, government, through the Auto Policy, has put in place preferential duties; it was part of the suggestions we made to encourage local production. That has helped so far, but we need to carry it further, the reason being that if we don’t achieve the volumes, then what we want in terms of lower prices will not manifest and what we are hoping is that Nigerians would be channeled towards buying locally produced cars, which means less of cars that have been used by other people for 10-15 or more years abroad; we are not second-class people; Nigerians are proud, hardworking people; they should have the opportunity to also buy brand new cars when they have worked hard in their lives.”

He said: “If the policy can be made wholesome, there is no need having a duty rebate alone, they must give us a wholesome environment where we can thrive, then the government will enjoy the benefit of it.”

Culled from: ThisDay Newspaper
Posted by Don Okereke at 6:29:00 am