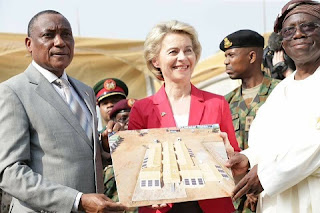 The German government has pledged to provide Nigeria with three million Euros for the procurement of surveillance equipment, mobile medical care unit and other support services for the country’s armed forces.
The Minister of Defence, Mansur Dan-Ali, announced this on Sunday at joint news conference with the German Defence Minister, Ursala Von dar Leyen, at the Nnamdi Azikiwe International Airport, Abuja.
The Germany defence minister was in Abuja to hand over some military equipment donated her country to Nigeria.


Dan-Ali said that the money would be provided through the extension of the German Technical Advisory Group Agreement for three years, 2017 to 2020. The minister said that under the existing agreement between the two countries under the group, 2012 to 2016, Germany had donated two mobile care units with extensive care unit facilities to the country. 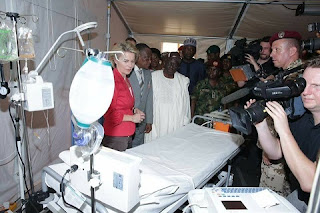 Also donated to the country by Germany, according to Dan-Ali are Vallon metal detector/Improvised Explosive Device and Explosive Ordnance Disposal equipment, as well training of personnel and maintenance of the device. He said Nigeria had also received three Mobile Tactical Ground Surveillance Radar systems from Germany for border security in the North East.

The minister thanked Germany for the assistance it had extended to the Nigerian armed forces so far to enhance their capacity to fight the Boko Haram terrorists.

“As we are all aware, terrorism is a threat to the existence of humanity and its development. We must, therefore, continue to stand resolute and united in our fight to stamp terrorism out of the planet,’’ Dan-Ali said. In her remark, the German defence minister, who handed over the equipment to Dan-Ali, noted that combating terrorism was both “difficult and dangerous. "Everywhere, the terrorists live bloody trail of destruction and death and time and again, they single out the most vulnerable of their targets like children just like the Boko Haram does in Nigeria. “This is why it is in our common interest that the population at home in my country, as well as here in Nigeria is safe so that the economy can grow again.
“Because that is the basis for jobs and prosperity so people can believe in the future in their homeland,’’ Leyen said.

According to her, terrorists abuse religion for their own evil purposes. Terrorists spread terror and violence all over the world, in France, Belgium, Aghanistan, Iraq, Turkey, Germany and here in Nigeria.Leyen said that the objective of the cooperation between her country and Nigeria was to assist the country to “conduct crisis prevention, crisis management and peace building operations.’’ “To compliment this, Germany is focusing on practical, very concrete issues – the capability and equipment the Nigerian servicemen need most urgently such as the protection against the many IEDs place by the Boko Haram". She noted that Nigeria was fighting a hard but most important fight, assuring the support of her country.