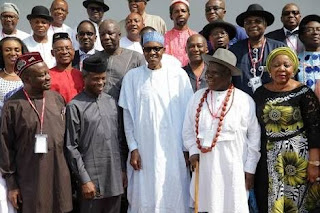 Niger Delta Stakeholders, under the aegis of Pan-Niger Delta Forum, on Tuesday presented 16-point demands to President Muhammadu Buhari at a closed door meeting in the Council Chamber of the State  House, Abuja.


The demands were presented by the Amanyanabo of Twon Brass Bayelsa State, King Alfred Diete Spiff, on behalf of the stakeholders.

The 16 point-demands, which the leaders believed can be achieved that would restore hope and confidence in the region, include:

“The presidential amnesty Programme: the decry that out of the five components of the disarmament and retrieval of weapons from the ex-militants, only the disarmament and demobilization component is being implemented. Tensions over the fate of the Niger Delta Amnesty Programme is as a result of lack of genuine exit strategy. They want the Programme reviewed to reappraise its core mandate to provide a robust exist strategy, in order to transit recipients into jobs, effectively integrate them and few the of dependency on stipends, so that their new-found skills would be of benefit to themselves and larger community.

“Law and Justice issues: in view of the insecurity situation in the Niger delta, a number of pending law and justice issues regarding some aggrieved groups and individuals are yet to be resolved. It is important to address these issues urgently as a step towards lasting peace.

“The effect of increased military presence in the Niger Delta: the increased in military presence has resulted in invasion of communities, displacement of persons, harassment and other firms of human rights abuse. They want government to halt the the escalation of tension in the region.

“Plights of internally displaced persons: they want relevant government agencies to take urgent measures to meet their immediate needs of those displaced by upsurge of insecurity in the region.

“The Maritime University Issue: want prompt take off of the Niger Delta university
“Key regional critical infrastructure: they want completion of of East-West road, full implementation of the rail project that is designated to run through the Niger Delta region to Lagos.

“Security surveillance and protection of oil and gas infrastructure. They want pipeline surveillance contracts given to the communities rather than individuals in a manner that is some benefits to their responsibility.

Communities would the see their responsibility over the pipelines as protection of what belongs to them.
“Relocation of Administrative and Operational Headquarters of IOCs: the headquarters of most oil companies are not located in the Niger Delta Region. As a result the region is denies all the developmental and associated benefits that would have accrued to the region from their presence. It has therefore become imperative for the IOCs to relocate to their areas of operation. This move old create a mutually beneficial relationship wi he host communities.

“Power supply: they advocate a power plan that strongly ties power supply in the region to gas supplies, thereby giving all sides a stake in proved stability.

“Economic development and empowerment: they want Brass LNG and fertiliser plant project including the Train 7 implemented, reviewing and updating the national gas master plan to integrate the economic interests and industrialization of the region, creating a Niger Dekta industrial corridor that would process some portions of the bat hydrocarbon natural resources, expediting work on the export processing zones, harnessing the huge rain-fed agricultural potentials of the area through the development of farms estates, fishery development projects and Agro-Allied industrial clusters etc.

“Restructuring and funding of the NDDC: The restructuring will ensure it refocuses as a true interventionist agency to respond swiftly to the yearnings of the grassroots of the Niger Delta. Communities must be able to have a say in what projects come to them and also want full implementation of the funding provisions of the NDDC Act.

“Strengthening the Niger Delta Ministry: they say the era of abysmal funding should end. The ministry should be adequately funded and strengthen to fulfill the purpose for which it was created.

“The Bakassi Question, recommend a comprehensive resettlement plan including development for the host communities and displaced population to reduce the risk of making the into a stateless people.

“Fiscal federalism, the region supports the call for true federalism and urged that federal government should treat the matter expeditiously.”

Briefing State House correspondents at the end of the meeting, Minister of State for Petroleum Resources, Ibe Kachikwu said that the meeting was largely a courtesy call to bring to the front burner the issues of the Niger Delta and the concerns from the Niger Delta Leaders and what they believed the federal government should do to bring down pressure, stress and militancy to the barest minimum if not eliminated.

According to him, it was a fairly good and civilized dialogue between all the parties, noting that it was a beginning of a process.

He said: “We had over a hundred representatives. So, it was a very well attended function. Opinions given were very honest, very frank to the point. But I think at the end of the day, we exchanged enough thought processes to go back to the drawing board to begin a process of work.

The Minister said that a lot of behind-the-scene talks have been going on which has boost oil production to 2.1 million barrels.

“One, we put a lot of moment on the fact of these incidences that happen. But I think the time has also come as members of the fourth estate of the realm to begin to put a lot of emphasis on the successes that have been recorded.

“The reality is that as of today and this morning, we are at 2.1 million barrels production. That’s substantial. That would not have happened without efforts that went behind through the royal fathers and leaders, through the militant leaders. A lot of behind-the-scene engagements had taken place and will continue to take place.

“If you look at 7 big wins that we set up last week, part of the expectations by 2017 is to target a zero shut as a result of result of militancy. What that means is that it is going to be an ongoing engagement. It will never finish. Different from what teams were setting up to do negotiations after the president had looked at this and given a strata, we also be the fact that on a roll on basis, the Ministry of Petroleum is continuing a quarterly meeting involving the oil companies who fairly beaten up  a little bit today amd the governors and the stakeholders which will happen once every 3 months.

“The first one is going to happen in Uyo in December and we are going to rotate that between the states so that we will have a platform irrespective of the negotiation that’s going on to deal with the issues and continue.” He added

On his part, Chief Edwin Clarke disclosed that the meeting was arranged by the Minister of State for Petroleum Resources and all interest groups were represented.

He said: “We also accepted and agreed that we should meet. They were many factions. Some had their own built-up base, hotels and so on. But it was agreed that we should meet to galvanize, collapse all the agitations, all the interest groups into one and this is what we did. So, we formed a central body known as Pan Niger Delta Forum with me as the leader and HRM Diette Spiff, former governor of old Rivers State and former governor of Akwa Ibom, Arc. Obong Victor Attah as some chairmen of the Central Working Committee that we will organize the visit and we invited all the interest groups and they came and what we saw today is a combination of all interest group.

“Mr. President received us very well. Today is November 1. A remarkable day. There were many of you particularly the press who tried to give a wrong impression that all was not well between the federal government and the Niger Delta people. So, I am therefore not surprised that you are asking how did the meeting go.

“It went on very well and all groups were represented. We discussed and presented a paper which was presented by HRM, Alfred Diette Spiff and Mr. President said he has noted everything that was there and that he would see that it is studied and that is what we have been looking for. That it is the disconnect that makes the government not to know what we are doing.”

According to him, it was clear that dialogue was key while the president will now set the ball rolling with the Minister assisting him.

“We have 16 points. We mentioned them in our address. Then we will appoint a very capable team of experts to negotiate on our behalf.

“But let me say this. You mention about the Niger Delta Avengers. They were not supposed to be here. They gave us authority as their fathers to negotiate on their behalf on the 19th of August when we met at the PTI, Warri. There is no doubt many groups will spring up.

“One man will be in his and say we are 20 and you will publish it. But we will continue to appeal to them. We have no other country but Nigeria. We cannot continue to destroy the assets of this country and at the same time destroying tje ecosystem of our own region. So, we are appealing to the youth and they are listening.
“One thing that gladdens our minds today when the Minister was addressing the audience, he mentioned that the issue of maritime university has been settled. We now have it, first goodwill from the government and we have a duty to react.” He said

Delta State Governor, Ifeanyi Okowa said that there was no issue with the Niger Delta Avengers in the past two and half months.

“I know that after the meeting in August, that was a stakeholders meeting led by E K Clarke and since them, we have not had any real issues with them. It is important that we put this on paper and it is our hope that we will continue with the consultation and they have given the elders the mandate to speak on their behalf in the meeting that will follow through.

“I do know that we havd had a few issues mainly on the land area now, not within the waters because many of these groups believe that they are not being carried along and that to a very large extent, those in the creeks have been given some prominence. No body has been given any prominence.” He said

He pointed out that the negotiation going on is not about money sharing, but about the future of the Niger Delta people and needs to be done in terms of development and empowerment, in terms of partnership and in terms of presence of the oil companies.

“We think that the Niger Delta rather than offices  being driven from far off and many other issues that have been raised.

So, largely the Niger Delta Avengers have sheathed their sword and things are moving on well. I can truly tell you. The security agencies are working very well with us to provide the best of security but this is going to take sometime.

“But the few incidences you have had and reading on papers about the Green Landers, they are not the same with the Niger Delta Avengers. I think it’s a misconception that some ethnic groups are having dominance but from the representation, it is obvious that all the ethnic groups were involved.

“Even the Urhobo ethnic were largely represented with his HRM, the Oroje of Okpe and some top persons from Urhobo nation. We will continue to do with the issues as they are.” He stated.