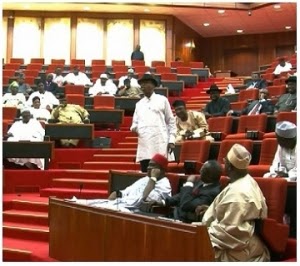 Given spike in kidnappings in Nigeria, the Nigerian Senate on Wednesday said it would soon pass a bill for a law that would make kidnapping in Nigeria punishable by death.


This resolution followed the adoption of recommendations of the report of by the joint Committee on Police Affairs, National Security and Intelligence on the “unfortunate reoccurrence of kidnapping and hostage taking.’’

The lawmakers held that capital punishment for the offence would serve as deterrent to potential offenders.

They urged state governments to enact laws that would aid the prosecution of kidnap suspects.
The Senate also adopted the recommendation that funding of security agencies should be taken as a “priority’’ while efforts should be geared towards creating employment opportunities in the country.

It resolved that security agencies should embark on training and retraining of their personnel, and advocated increased information-sharing arrangement among the agencies to boost crime prevention.
Presenting the report earlier, Chairman of the Joint Committee, Sen. Abu Ibrahim (APC Katsina South), said that kidnapping which started in some regions had become a nationwide menace.

He said that the security agencies knew the mode of operation of the kidnappers but were usually hampered by lack of funds and equipment to combat them.

The report stated that there was undue rivalry among security agencies and that it had engendered lack of synergy in their operations.

The senators, however, held that kidnapping had remained prevalent because there was no appropriate punishment for offenders.

They condemned the payment of ransom to kidnappers, saying that it had encouraged and made the “business’’ profitable.

Deputy President of the Senate, Mr Ike Ekwerenmadu, said that Nigerians had encouraged kidnapping by panicking and paying ransom too quickly.

“We have encouraged this type of kidnapping because we panic and pay money; most times, our people are reluctant to delay or endure the inconvenience or the hardship and then they quickly negotiate.

“If we want to discourage this kind of kidnappings, the only way forward is to insist that you will not pay,” he said.

Sen. Ben Bruce (PDP Bayelsa East) in his contribution said that kidnapping had continued to thrive because there was no form of deterrent.

He decried the attitude of security agencies which often went to sleep after kidnap victim’s release, saying that no serious effort was made apprehend and prosecute the culprits.

“One of the biggest problems we have is that we have no deterrent; we don’t put people on trial, we don’t publicise the trial so people can see the consequence of kidnapping.

“One reason why people are not scared of committing crime is the issue of drugs, when you are on drugs you don’t think, you don’t think of the consequences of your action at that time.
“We must do something to have few criminals and the only way to do that is to deal with the social issues; we need to deal with the drug problem.

“We need to publicise the trials and sentencing of criminals,” he said.
Sen. Ovie Omo-Agege stressed the need for intelligence-sharing among communities and security agencies.

According to him, most times, members of a community know the criminal elements among them and could give such information to the police if there were adequate information-sharing.

On his part, Sen. Dino Melaye (APC Kogi West) recommended that kidnappers should be hanged or made to face firing squad.

In his remark, President of the Senate, Dr Bukola Saraki, commended the committee for a job well-done and said that there was need for a more stringent law on Kidnapping.

Email ThisBlogThis!Share to TwitterShare to FacebookShare to Pinterest
Labels: Death penalty for Kidnapping in Nigeria, kidnappings in Nigeria, News