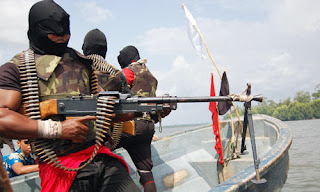 New militant group known as Niger-Delta Avengers, NDA, warned yesterday that it had concluded plans to attack installations in Abuja, Lagos, Port Harcourt and Calabar.
To this end, the military has deployed soldiers to Oporoza, headquarters of Gbaramatu Kingdom, Warri South-West Local Government Area of Delta State which happens to be the home base of wanted ex-militant leader, Government Ekpemupolo, alias Tompolo. The troops arrived the community in two gunboats and were said to be searching for members of Niger Delta Avengers, the aforesaid militant group that has resumed bombing of oil installations in the state.

The military men, who came at 12.30a.m., laid siege to the community until about 5a.m., when they departed. A source said the Army reportedly acted on intelligence report that the militants had secretly converged on the community. However, the Pere (traditional ruler) of Gbaramatu Kingdom, HRM Oboro-Gbaraun II, Aketekpe Agadaba, who expressed fears over the development, yesterday, offered to mediate in the face-off between the Federal Government and Tompolo, despite his dissatisfaction over neglect of the kingdom by government. But the Niger-Delta Avengers, which earlier claimed that it had no link with Tompolo and in fact, issued him a three-day ultimatum for denouncing the group, remained unperturbed, as it said it had concluded plans to extend its attacks to Lagos, Abuja, Port Harcourt and Calabar.

A source said leaders of the militant group reviewed their operations, weekend, and expressed satisfaction that it was able to effortlessly cripple oil operations in Delta State and was willing to continue with the bombings, if President Buhari failed to address their demands.

The Military will fish out perpetrators—

The Special Adviser to President Buhari on Niger Delta and Co-ordinator of the Presidential Amnesty Programme, PAP, Brig-Gen. Paul Boroh (retd), expressed confidence in the ability of the military and other security agencies to apprehend those behind the recent sabotage of oil and gas pipelines in the Niger Delta. “None of these elements will go unpunished for their nefarious acts against the interest of the nation,” Boroh warned. Boroh, who spoke in Abuja, said following the presidential directive to arrest the situation, he was confident that the perpetrators will be arrested soon.

In a similar vein,  the Oodua Defenders Union, ODU has described the threat by Niger Delta Avengers, to attack Lagos within a matter of days as an insult on the Yoruba race. In a statement  by its President-General,  Rabak Anthony, the group warned Ijaw youths against any attack in Lagos or any part of Yorubaland. Oodua Defenders Union, said:  “This Ijaw threat that was published in all the media, both electronic and print, cannot be taken for granted. Therefore, the Yoruba are ready to make the first move against the Ijaws in Lagos before their brothers will storm Lagos. “We fought the Ijaws here in Lagos before because of this arrogance and they know we are ready for them. They came here about five years ago to attack the Atlas Cove where Naval officers guarding tank farms were killed.  So, we are not taking this threat without preparation. We are ready, let them make the move.” The group said its members, spread across the South-West, could deal with the Ijaw threat, asking security agents to go after the Niger Delta Avengers.

Culled from: Vanguard Newspaper
Posted by Don Okereke at 7:37:00 am