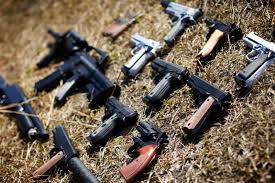 A national survey on small arms and light weapons is currently underway in Nigeria, to put figures to the menace of the proliferation of arms in the country, especially with the continued success in the fight against insurgency.


The survey, which is expected to give a real picture of the problem Nigeria faces with illegals arms proliferation, is one out of a seven point agenda of the Presidential Committee on Small Arms and Light Weapons.

Repealing of the obsolete Firearms Act of 1959, which is the only existing legislation on firearms in Nigeria is also on that agenda.

The Chairman of the Committee, Ambassador Emmanuel Imohe, said there will also be a physical weapons marking programme using an international tracing instrument to mark all weapons in the military, police and all other security agencies.

The Director of the UN Regional Centre for Peace and Disarmament in Africa, which is currently supporting Nigeria with programmes to check arms proliferation, Olatokunbo Ige, said meaningful development in Nigeria will be an uphill task until concluded.

Culled from: Channels TV
Posted by Don Okereke at 2:06:00 am