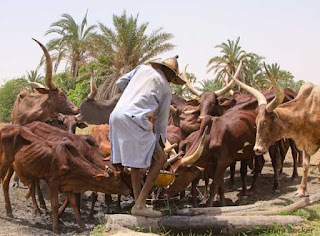 Notwithstanding ongoing peace efforts been brokered by various stakeholders and an 'investigation' ordered by President Buhari to unravel the causes and to proffer solutions to the recent Agatu killings, Daily Post newspaper reports that no fewer than eight persons have been reportedly killed in a fresh attack on Benue communities by suspected Fulani herdsmen on Tuesday in Logo local government area of the state.


It was gathered that the marauders invaded four villages, including Tse Chia, Tse Nhumbe, Deghkia and Ngorukgan at about 2am, shooting sporadically and burning houses and huts in the affected communities.

According to the source, “it was a coordinated attack on the four villages by the well armed herdsmen who stormed our villages in large number, around 2am and shooting sporadically.

“It was the sound of their gunshot that woke everyone from sleep, resulting in a stampede and the gunning down and macheting of about 8 persons, though the causality figure maybe more than that because many person are still unaccounted for just as scores sustained serious injuries.

“As I speak with you, the affected villages have been deserted and the invaders have taken over and are razing in the ancestral homes of the people who have fled to Anyii, Ugba and Abeda towns, in their thousands, for fear of being killed.

“It’s a pathetic situation, the development has inflicted untold hardship on women, children and the elderly who are trekking long distances in search of safe haven and awaiting the intervention of security operatives,” the source hinted Vanguard.

Meanwhile, the Benue State Police spokesman, Assistant Superintendent, ASP, Moses Yamu said he was yet to receive details of the development.
Posted by Don Okereke at 9:11:00 pm