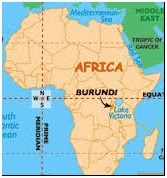 The Burundian army has declared it is taking control of Burundi in a radio announcement.
The coup d'etat was announced on a private radio, with senior army generals saying they were deposing the embattled President Pierre Nkurunziza, who is travelling to Tanzania to meet East Africa Community leaders to discuss the recent violence that has rocked his country.

"Forces Vives de the Nation have decided to take charge of the nation," Godefroid Niyombareh, who was fired by Nkurunziza as intelligence chief in February, said in the radio announcement.
"President Pierre Nkurunziza is removed from office."

Niyombareh announced that a national salvation committee had been set up to run the country, and said he is working with civil society and other groups on forming transitional government.
"All people are asked to respect the lives and property of others," Niyombare added.

Fighting to take over state broadcaster
Military officers have been reported to be closing on the Radio-Télévision nationale du Burundi (RTNB), the country's state broadcaster, as loyalists fire back to protect the building - still under loyalist control.
As at 12.30 GMT, the loyalists were still holding the building

Burundi opposition not behind coup
Burundi's opposition leaders have denied being behind the coup. Former rebel militia leader and presidential hopeful Agathon Rwasa told IBTimes UK he did not know about the coup.
"I am discovering it now on the radio, just like you," he told IBTimes UK from the capital Bujumbura. "Now, we will have to see what happens next."

International reaction
A South African foreign ministry spokesman told Reuters that "it's way too early to say" whether a coup had taken place in Burundi but added that the situation is being closely monitored.