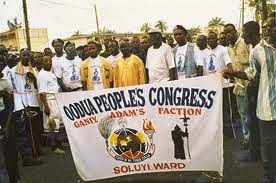 Showdown between the Police and ethnic militia group, Oodua Peoples Congress, OPC members is in the offing following a warning to the Police authorities to withdraw officers and men of the force who have allegedly refused to vacate the NNPC pipelines across the country in defiance of a n order by the management of the corporation asking them to do so.


Giving the warning in Lagos, Founder of OPC, Dr Fredrick Fasehun accused the Police of frustrating OPC members from executing a contract awarded to a firm that has close links with the organisation.

While calling on the Inspector General of Police, Mr Suleman Abba to take his warning seriously, Fasehun said: “Enough is enough. We have to let Nigerians know what is happening. Last month, the NNPC awarded the contract of securing NNPC pipelines from oil thieves to us. They asked us to move in our personnel to site immediately. This was after they told us that the police carrying out the task before had been asked to withdraw. But to our surprise, almost one month after, police personnel have refused to comply with NNPC directives. While some of them left, majority of them have refused to go, and when we asked them why, they have not been able to give any satisfactory answer’’.

Accusing police officers involved of engaging in illegal duty, Fasehun said:
“Since NNPC has disowned these people, Nigerians should ask them what are they still doing there? My personal investigations revealed that these recalcitrant uniformed men have refused to withdraw from the pipelines as a result of pecuniary gains. This is the belief of many people. One of them even told one of the OPC members that infiltrated their rank that ‘has he ever seen anywhere in the world where somebody licking from a pot of honey is asked to leave the place and he will ever willingly do so?’

The OPC chieftain further lamented that the police’s refusal has been preventing his firm from fully deploying personnel to guard the pipelines.

“For now, we have started deploying men to secure the pipelines. We started the deployment on March 16, and up till date we have deployed over 4,000 men from Mosimi in Sagamu, Ogun State to the hinterland and border communities in Oyo State. We still have more areas to cover, and we have men on the ground but the police are frustrating us by refusing to withdraw their men in defiance of the NNPC order. What are the police looking for again since NNPC that originally sought their service had now asked them to leave the pipeline security duties for us”, he argued.

While imploring the Inspector General of Police to call his men to order, Fasehun vowed that OPC will not succumb to intimidation from any quarters.

“We have been given a job to do, and we are going to do it. Nobody can frustrate us. Not even the Police or any other group. I’m only suing for peace in order to avoid OPC from being labeled as a troublesome organisation. I hope these stubborn police officers will not allow OPC to solve this problem our own way. If they say they were brought by the NNPC, and the same NNPC has now asked them to go, then what are they still looking for? Why are they refusing to go?”, he asked no one in particular.

Advising Police not to dismiss his warning with a wave of the hand, Fasehun said: “I’m a man of few words. When trouble is sitting down on its own, and you go out of your way to look for trouble, then whatever you see, you take it. In over 20 years of my leadership of the OPC ,I have never seen any obstacle to OPC that has not been overcome. We will surely overcome this one also’’.

Asked whether NNPC has again been informed about the refusal of the Police to withdraw from the pipelines, Fasehun said “We are in regular touch with the NNPC, and they told me again few days ago that they have re­ported the matter to the IG. My thinking is that those police men behind this issue are carrying out illegal duty, and this is why I will like to appeal to the IG to investigate this matter. Not only that, appropriate punishment should be meted out to police men involved in this matter’’

As to whether he is worried that the incoming government may terminate the pipeline contract given to the OPC by the NNPC, Fasehun said “I don’t think so. I don’t think Buhari or the new APC led government can be that petty. What OPC is doing is to protect government’s economic interests. A lot of people have also been making this mistake of thinking that President Goodluck Jonathan awarded this contract to OPC. This is not so. How can government award contract to an organisation that has been declared illegal by government? OPC and the contract have nothing to do with Jonathan. It is the NNPC that gave out the contract, and it was not awarded to OPC. What happened was that NNPC gave out this contract to a firm, and it was this firm that sought the assistance of OPC in helping it to recruit personnel to guard the pipelines, and which we have willingly done’’.

All efforts to get the Police authority to respond to Faseun’s allegations proved abortive as mails and text messages sent to the Force Public Relations Officer, Emmanuel Ojukwu were not responded to up to the time of going to press yesterday.

Source:
sunnewsonline
Posted by Don Okereke at 8:30:00 am