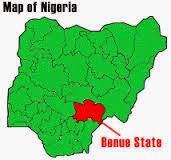 No fewer than 45 persons were yesterday killed in a violence that erupted between the Ologba and Egba communities of Agatu Local Government Area of Benue State.


Confirming the incident, the Benue State Commissioner of Police, Hyacinth Dagala, said only 23 dead bodies were discovered, while three persons sustained serious injuries and had been taken to the hospital.

The police commissioner said that the villagers had been fighting over a fishpond and that the renewed crisis was as a result of suspicion by the Egba community that the Ologba had organized the recent deadly Fulani invasion against them.

Dagala said relative calm has returned to the warring communities, adding that his men are on ground to maintain peace in the area. Also, confirming the incident, Mr. John Ngbede, the immediate past Commissioner for Works and PDP Deputy Governorship candidate in the just concluded election, who hails from the area, said the communities have had long-standing unresolved issues.

Ngbede said that in the wake of yesterday’s clash, which started in the evening, many people were injured, even as thousands are now refugees in Obagaji, headquarters of the Agatu Local Government Area.