Cameroon said on Thursday it had arrested three suspected arms dealers believed to be linked to Nigeria’s militant Islamist group Boko Haram.
Also some other suspected terrorists were also arrested while attempting to escape into Cameroon through Taraba and Gumti, Adamawa State by the Nigerian Joint Military Task Force.
The men were caught in the far north of the country on Wednesday, near the border with Nigeria where the group has been waging a brutal armed insurgency.
“Members of the BIR (an elite rapid-response unit of Cameroon’s army) and the police found a significant stock of arms including a kalashnikov and rocket launchers near Goulfey,” a Cameroonian police official told AFP, on condition of anonymity.


“Three suspects were taken in for questioning, suspected of being among the arms traffickers that supply Boko Haram,” he said. “The stock of weapons was sizeable, and we think the plan was to bring them through Cameroon before taking them to Nigeria.”
Both the weapons and the men were taken to Maroua, the regional capital, a source close to the town’s administration said.

In a related development, the Nigerian Joint Military Task Force also arrested some suspected terrorists while attempting to escape into Cameroon through Taraba and Gumti, Adamawa State .
The suspects were said to have come out of hiding in the forest due to hunger in their make shift camps. Those that were apprehended led the Nigerian troops to other hideouts. Seven terrorists died, while a large number of Improvised Explosive Devices, IED's, and rifles were recovered including over 70 motorcycles. Similar encounter in Gombi also led to the death of four other terrorists. 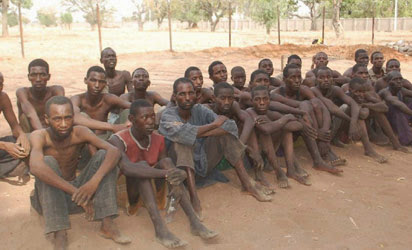