The weapons, which included anti-aircraft guns, rocket propelled guns as well as general purpose and other brands of machine guns, were found following the arrest of a middle-aged terrorist, the military said. Several rounds of ammunition were also recovered.

According to a statement by the Director of Defence Information, Major Gen. Chris Olukolade, the arrested suspect claimed to be a Cameroonian and an arms courier for the Boko Haram.

Major Gen. Olukolade said the suspect led troops on the cordon and search operation. He said the terrorist also disclosed to the military that the weapons were stockpiled to be used in a pending attack on some communities around the Nigeria- Cameroon border.

The military spokesperson also noted that all the weapons have been evacuated while the military continues to patrol the area. Major Gen. Olukolade said a particular cave in the area is undergoing a thorough search for terrorists who are believed to have taken refuge there.

He said the Chief of Army Staff, Lt. General Kenneth Minimah, has taken it upon himself to check on deployment and disposition of troops in various locations in Yobe, Borno and Adamawa States; the three states under emergency rule.

Major Gen. Olukolade said the military is undertaking a comprehensive air surveillance of the entire mission area in addition to the direct inspection of some key locations where operations are being conducted. 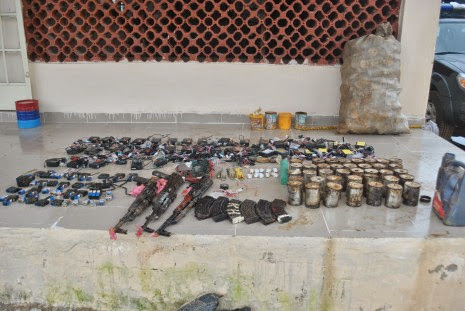