Our attention has been brought to an erroneous and misleading press release on published on Guardian Newspaper, December 31, 2022 and on other media platforms by the Nigerian Army spokesman, Brigadier General Onyema Nwachukwu claiming inter-alia, that ‘’Lieutenant PP Johnson, a female army officer, was abducted on Monday, December 26, 2022, while visiting her grandmother in Aku-Okigwe in Imo State, shortly after completion of her Cadet training and subsequent commissioning as a Lieutenant into the Nigerian Army’’.

Apparently, it was on the strength of this false notion that a horde of military personnel and other security agents invaded Aku community in Okigwe LGA on Friday, December 30, 2022, tenably in search of the abducted officer. Reports indicate that rampaging security agents not only shot indiscriminately but plundered, burnt several houses in the hitherto serene Aku community, located in Okigwe LGA of Imo state. 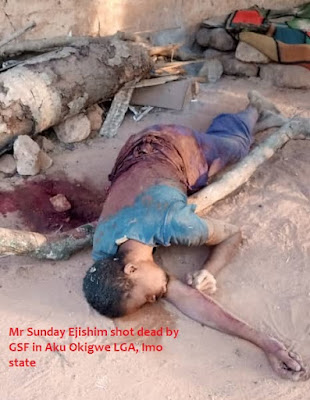 We clarify and explicitly state inter-alia that:

1. For the avoidance of doubt, we DO NOT condone nor hold a brief for non-state actors in whatever guise. We wholeheartedly condemn the pervasive, sporadic criminality within Okigwe environ, including the intermittent kidnappings attributed to so-called ‘herdsmen’, and more specifically the abduction and dehumanizing treatment meted out to Lieutenant PP Johnson.

2. 2. Army officer, Lieutenant PP Johnson is NOT from Aku community neither is her mother, father, grandmother from Aku-Okigwe as incorrectly claimed in aforesaid press release. It follows that the claim of her purportedly visiting her grandmother at Aku-Okigwe is blatant FALSEHOOD as she has no paternal or maternal affiliation to Aku community.

3.    3. Lieutenant PP Johnson was not abducted in Aku community. Without pointing fingers, the video of her abduction and dastardly treatment which was widely circulated online suggests she was abducted along the Ihube-Enugu expressway. According to Vanguard Newspaper report, January 1, 2023, Lt. Johnson was abducted at ‘’Mbaraukwa’’, her maternal home. There is no village, kindred or place known as Mbaraukwa in Aku-Okigwe. It therefore beggars belief why Brigadier General Onyema Nwachukwu tagged in his press release that she was kidnapped while visiting her grandmother at Aku-Okigwe?

4.     4. Aku people are generally agrarian, peaceful, and law-abiding. Aku people are cognizant of their rich tradition and cultural heritage which amongst other things, forbids the mere thought of hurting a 'nwa nwa' (grandchild) let alone dehumanizing or killing a grandchild. It is a distasteful, an abomination. Children born and bred in Aku community are aware that hurting/killing a nwa nwa (grandchild) is an abomination in our clime.

5.   5.  The dust is yet to settle, and people are yet to return home, but we understand that a few people may have been killed during the latest military bombardment of Aku community. One of them is a young man named ‘’Sunday Ejishim’’ who was gruesomely shot dead by the rampaging government security forces (GSF). This is the umpteenth time that Government Security Forces (GSF) will be launching unrestrained, indiscriminate attack, and burning of houses on Aku community. Recall that a secondary school student, Miss Favour Okoronkwo was gunned down in her family house on November 13, 2022 while Mr. Ifeanyichukwu Orji, a father of seven children whose wife gave birth to twins not long ago, was shot dead on November 20, 2022, also in front of his house.

The ongoing indiscriminate military operation, extrajudicial killings, and barbaric human rights abuses on Aku community negates the Nigerian Armed Forces Rules of Engagement (RoE), Code of Conduct, the principle of minimum force and proportionality which amongst other things stipulates that, "fire must be aimed and controlled and that indiscriminate firing is not permitted". No doubt the security agencies can go about their operation, but their action must be intelligence-driven, they must use very minimal force, ensure there is no collateral damage, no indiscriminate burning of houses, nay, plundering.

2.      We call for an independent judicial inquiry and investigation into the vicious attack on Aku community. The brutal action by security forces on Aku Community in Okigwe LGA must not be swept under the carpet. This must not be like the case of ‘’unknown soldier’’. It must be investigated, and action taken against the masterminds.

Office of the United Nations High Commissioner for Human Rights