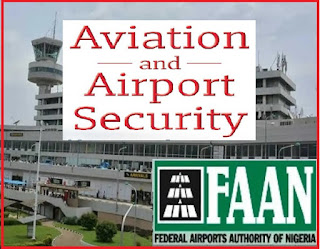 Seven months ago, unknown persons accessed leased Arik Air aircraft, a Boeing 737-700 and removed vital equipment from inside, where it was parked at the ramp at the domestic wing of the Murtala Muhammad International Airport, Lagos, known as MMA2. Also, last Sunday a young man accessed the United Nigeria Airlines aircraft at the same ramp. Chindu Eze writes that these incidents indicate that security is deteriorating at the nation’s busiest gateway.

Last Sunday, a young man who claimed to be 14-year old was arrested inside one of the aircraft of United Nigeria Airlines Limited (UNA) as a suspected stowaway.

According to eyewitness account, the man was as unconscious by when he was apprehended. Statement from the airline indicated that he was discovered during pre-flight inspection and the aircraft in question was being screened and prepared for service.

Further investigation also revealed that the suspect gave his name as Rasheed Mukar from Ilorin but lives at Badagry.

He was reported to have told security personnel during interrogation that he breached airport security from the Ile Zik end of the perimeter fence on the night on Saturday September 3, 2022 to access the airport’s apron where the aircraft was parked.

Mukar also said he had earlier attempted to gain access to Boeing aircraft types, also parked at the airport, and failed.

According to the suspected stowaway, his intention was to follow the aircraft out of Lagos.

In a related account from the statement from Bi-Courtney Aviation Services Limited (BASL), which built and is operating the domestic terminal, “The 14-year-old stowaway found unconscious inside one of the airlines of United Nigeria (the Airline) is now safe in the custody of the airport authority where he is being held for further investigation.”

The statement that was signed by Head of Media, Bi-Courtney Aviation Services Limited, Oluwatosin Onalaja, disclosed that the boy told investigators that he gained access into the airside through an opening at Ile- Zik, FAAN’s perimeter fence along Lagos-Abeokuta expressway.

“At around 6:10a.m. on Sunday 4th September 2022, United Nigeria (the airline) informed Bi-Courtney Aviation Services Ltd (BASL) of a 14-year-old stowaway boy found unconscious inside one of their aircraft. The boy was brought out of the aircraft and taken to the MMA2 clinic for first aid medical attention. He was later transferred for further treatment to the FAAN clinic where he regained consciousness at about 10:20a.m.

“Upon further interrogation by a combined team of BASL AVSEC (Aviation Security) and FAAN (the Federal Airports Authority of Nigeria) Aviation Security Officers, the following information was obtained from the boy: his name is Rasheed Mufutau, he is 14 years old, he lives in Badagry but hails from Kwara State, he is an orphan. He gained access into the airside through an opening at Ile- Zik along Lagos-Abeokuta expressway; his intention was to travel, as he was tired of the country.

According to the statement, the boy has been discharged from the hospital and taken to the FAAN Crime Office at the Murtala Mohammed International Airport along with United Nigeria Security Guard for further questioning. The airline has since commenced normal operations.

“We are an active part of the ongoing investigation to ascertain exactly what happened and to aid the prevention of any such occurrence in the future,” Onalaja said.

In January this year, unknown persons gained access into the aircraft of a leased Boeing B737-700 being operated by Arik Air at the same terminal facility and stole some critical equipment from inside the aircraft cockpit.

Informed sources told THISDAY that the suspected thieves accessed the aircraft, canonicalized it and took away Flight Management Computer (FMC), Pilot Static Cover and other sensitive parts from the aircraft. The incident happened on January 19, 2022 at about 11:00 pm.

During that time, THISDAY spoke to some airport officials privy to the preliminary investigation on the incident, it found out that Arik Air Chief Security Officer (SCO) reported the incident to FAAN in the mid-day of January 20, 2022 and explained that the Arik Air aircraft with registration number EI-ULN was parked at MMA2 ramp at 4:30 pm the previous day.

The source also disclosed that the Arik Air aircraft engineer in charge of the aircraft stated that at about 4:30 pm on January 19, after the pilot and cabin crew had left the aircraft, the engineers carried out routine checks on the aircraft, which lasted for about one and half hours and when they left, the aircraft was still parked at the apron.

THISDAY also gathered that the aircraft engineers were still at the engineering room when the Arik Air catering personnel came to them at about 8:40 pm and informed them that they wanted to service the aircraft.

THISDAY learnt that while all the activities were going on, all the personnel involved were Arik staff; there was no outsider involved.

A team of crime investigation and intelligence was reported to have stated that there was no Arik aircraft security guard under or at the foot of the aircraft on January 19 when it occurred.

The Arik Air aircraft incident was described as insider security threats. But from the reports already made available to the public, last Sunday incident was an outsider’s job. The question many asked was how did the young man gain access to the airside of the airport without being caught by security operatives?

In January, many Nigerians were shocked when the report went virile on social media that Arik Air’s leased aircraft, a Boeing 737-700 with registration number, EI-ULN parked at the ramp of the Murtala Muhammed Domestic Airport (MMA2) was tampered with and critical equipment removed by persons initially suspected to have breached security and accessed the airside of the airport.

In the aviation industry, personnel who work at sensitive areas of the airport or the airlines are profiled regularly and are even monitored to know what they do outside work and the kind of relationships they keep.

“What have been the reports or the responses of the Airport Security Committee to these various incursions? As at 2007, there were five access into the aircraft operating areas from the public areas outside the passengers and cargo terminals, how many are there today and how adequately are they manned? The boy was said to have moved from the GAT area to MM2 and there was no internal security patrol nor aprons surveillance that saw him; that tells me that a bigger thing could happen and it is only after the act that we will come to see our failures and neglect. I have heard many times that CCTV or electronic control is what the airport security requires; that may be desirable but equipment alone cannot work without it being manned by skilled manpower. That again is what the responsible authorities must look into in the career progressions of the personnel manning the airport security architectural system. The background checks on those manning must regularly be reviewed alongside the operator’s security programmes; otherwise, you may be keeping insider threats.”

THISDAY learnt that there has been perceived laxity among security operatives that man strategic places at the airport and security patrol has been on the breach. So industry security experts have called on FAAN to ensure the reinforcement of security at the airports.

Former Director General of the Nigerian Civil Aviation Authority (NCAA), Dr. Harold Demuren, who was in charge of the agency when the underwear bomber, the Nigerian Umar Farouk Abdulmutallab, attempted to bomb US airliner on December 25, 2009 en-route Detroit from Amsterdam, said recently in Lagos that Nigeria would have been blacklisted if it didn’t have the security system that captured the movement of Abdulmutallab when he transited from Ghana to board KLM flight to Amsterdam at the Lagos airport.

“At this point, I’ll like to appreciate the contribution of the various agencies at the airport, particularly FAAN for providing the CCTV footage. The Nigerian Immigration Service that provided detailed entry and exit from the airport and the MAEVIS for providing the Advanced Passenger Information System (APIS) information and others. These were parts of the information NCAA used to remove Nigeria’s name from the ‘US Country of Interest Watch list.”

Industry observers, however, express fear that the security system might have degenerated; that FAAN has to show that it is improving on the security architecture it has built over the years.

Recently, industry experts under the aegis of Aviation Safety Round Table Initiative (ASRTI) held a meeting on multi-layer security system at the nation’s airports and made recommendations in their communiqué.

They recommended multi-layered security system, which does not necessarily mean physical multi-layer structure but technologically driven security coverage that should be provided for all airports in Nigeria to ensure security of airports, passenger and airports infrastructure.

“There is an urgent need for provision of more funding for security at the nation’s airports to enable acquisition and deployment of state-of-the-art security equipment. There is need to reduce the number of physical security checking points at the nation’s airports to enhance passenger facilitation and avoid discouragement of travel by air with unnecessary delays at the airport

“There is need for collaboration and direct engagement between aviation professionals on aviation issues with relevant aviation agencies so as to prevent loss of confidence in the sector,” the communiqué stated.

“There is need for various security agencies at the airports to prioritize national interest, work in synergy and collaboratively, rather than working in silos at the detriment of the intended aviation security objectives

“Since each security agency was established by an Act of the National Assembly, there is need therefore for FAAN to be empowered as the apex coordinator of all other agencies operating at any of our civil airports to coordinate, control operations and the management of security agencies,” ASRTI stated.