Barely 24 hours after Governor Bello Masari of Katsina raised the alarm on the invasion of the state by armed bandits from neighbouring Zamfara, the state government has expressed doubts if the general elections scheduled to begin with the presidential polls next month will hold in parts of the state because of the precarious security situation across some eight local government areas.

Governor Masari had last Wednesday alerted the nation, at the opening ceremony of an emergency security meeting at the Government House, that armed robbers and kidnappers had literally taken over Katsina State as he consequently tagged the state unsafe for anybody including him.

Briefing reporters on Thursday evening, on some of the deliberations at the meeting, the Secretary to the State Government, Dr. Mustapha Mohammed Inuwa, warned that unless the security situation is addressed the elections may not hold in at least eight local government areas of the state.

Described as frontline locations controlled by bandits and cattle rustlers, the local government areas are, Jibia, Batsari, Safana, Dan-Musa, Faskari, Sabuwa, Dandume, Kankara and parts of Kafur, Masari’s local government. Jibia shares “porous” boundaries with the Republic of Niger, routes activities of unrepentant smugglers thrive with regular bloody clashes with joint security patrol teams from Nigeria and Niger. Apart from this, the local governments have a common denominator governing them as they are all linked with the Rugu forest, said to be some 2010 square kilometres stretch, starting from the Republic of Niger, through to Katsina and parts of Kaduna State. Comparable only to the dreaded Sambisa forest in Borno State, Rugu forest is reportedly a comfort zone for bandits and other criminal elements who apparently exploit the terrain to remain virtually out of reach of the security forces.

According to Mustapha, “certainly, if the situation continues this way, it is going to affect the elections. If you ask INEC officials to go and conduct the elections in the affected areas they may not be willing to go there. We have to safeguard the places before the elections.”

The expanded security council meeting had traditional rulers, security chiefs in the state, interim local council chairmen from the affected local government areas, village heads and religious leaders, among others in attendance. Mustapha said that the meeting resolved to raise a committee which he heads, to examine all the issues discussed and how to tackle them.

As he put it, “I hope you are all aware of the measures this government has been taking in handling the security situation in the state. We have archived a lot especially in the area of cattle rustling and banditry. We were able to curtail the issue of castle rustling to a reasonable level and banditry to to some extent because of the measures taken by government. Unfortunately, a couple of weeks back, the issue of kidnapping became so serious to a level that the experience we had over cattle rustling became a child’s play.

“The meeting identified lack of synergy among the security forces fighting bandits in Zamfara Kaduna and Katsina states. We agreed that these states and the Republic of Niger must come together to tackle this problem headlong. The meeting also identified that the security is grossly inadequate especially the police and therefore mandated the governor to solicit the assistance of the Inspector-General of Police to increase the police personnel and equip them with modern equipment.

“We may also have to de-gazzete some of the frontline areas where these activities take place, particularly the forests close the urban centres in the state. Those places were initially designed to be grazing areas for livestock but the criminals have turned them to their hiding place. The Emirs of Katsina and Daura as well as the ulama will be involved in this and we urge them not only to intensify their prayers but to equally continually appeal to their subjects to fear God.”

Analysing the security situation in the state, an apparently embattled Masari had told participants at the meeting on Wednesday that, “no one, including myself, is safe, I am not safe.” He ranked cattle rustling number three on his list of acts of prevailing threats to security of lives and property in the state, noting that kidnaping and armed robbery have taken the centre stage.

According to the governor, “our state is currently under serious siege, by bandits, kidnappers, with castle rustlers taking the third position. Kidnaping is now the order of the day in Katsina State. Armed robbery is also now the order of the day in Katsina State. Only two days ago, some people left my residence at about 3am and when they got to the Ring Road area, a gang of of about five fully armed men robbed them at gunpoint. So, this is how bad it has become now. All the security reports I received today (Wednesday) is either about kidnapings or armed robbery. So, our state is under siege and that is why we decided to call for this extra-ordinary meeting. No one, including myself is safe. A woman, I was told, was abducted by kidnappers and after demanding N5 million they shot the person who took the money to them.”

The eight most affected local governments in Katsina share boundaries with Zamfara State where armed banditry currently reigns supreme, according to reports. 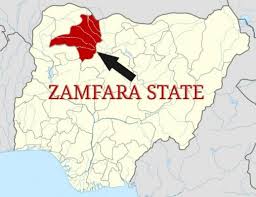 Traveling on the 150-kilometre Jibia – Gusua road through Kaura Namoda has become nightmarish for motorists as bandits continue to harvest commuters and abduct them into the nearby forests around Gidan Jaja, Chabas and Yan Bedi, all close to Katsina. According a recent report, victims whose relations are not able to pay the ransom demanded are butchered and sold as spare parts to herbalists.

Last week, some 2000 persons, according to the Katsina State Emergency Management Agency, fled their communities in Zamfara and currently taking refuge at various locations in Kankara local government area of Katsina.

Reacting to the Masari outcry, the main opposition People’s Democratic Party (PDP) in Katsina State urged both Masari and President Buhari to step aside, having failed, according to the party, to provide the necessary security for citizens. According to the PDP Chairman who is also the party’s governorship running mate, Alhaji Salisu Majigiri, “this is a confession from the Chief Security Officer of the state and I think the best thing Masari can do is to take the path of honour and step aside as governor. His resignation will pave way for Katsina not to continue to be under siege.”

https://www.sunnewsonline.com/armed-bandits-take-over-8-lgas-in-katsina/
Posted by Don Okereke at 4:19:00 am