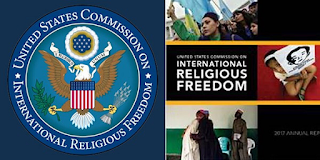 Against the backdrop of incessant killings in Nigeria, particularly the predominantly Muslim herdsmen slaying Christian farmers, the United States Commission on International Religious Freedom (USCIRF) has recommended to the US government that Nigeria should be designated as a “Country of Particular Concern”, CPC.


This recommendation is contained in the latest report of the USCIRF titled, “2018 Annual Report–Key Findings and Recommendations,” obtained yesterday by THISDAY on the website of the US Department of State.

While on Thursday, at a telephonic press conference on the latest report on religious freedom with Samuel Brownback, US Ambassador-at-Large for International Religious Freedom, in Washington, D.C., it was disclosed that plans were underway for the American envoy to visit Nigeria and later for religious leaders in the country and other African countries to be invited to the US to discuss the issue of religious violence and freedom with the Donald Trump administration.

Touching on prevailing violent conflicts having religious connotations in Nigeria, the report said: “Religious freedom conditions in Nigeria remained poor during the reporting period. The Nigerian government at the federal and state levels continued to repress the Shi’a Islamic Movement of Nigeria (IMN), including holding IMN leader, Sheikh Ibrahim Zakzaky, without charge, imposing state-level bans on the group’s activities, and failing to hold accountable Nigerian Army officers who used excessive force against IMN members in December 2015.

“Sectarian violence between predominately Muslim herders and predominately Christian farmers increased, and the Nigerian federal government failed to implement effective strategies to prevent or stop such violence or to hold perpetrators accountable. Finally, other religious freedom abuses continue at the state level. Based on these concerns, in 2017 USCIRF again finds that Nigeria merits designation as a country of particular concern (CPC) under the International Religious Freedom Act (IRFA), as it has found since 2009.”

In the 2018 Annual Report of the commission, documenting religious freedom violations and progress in 28 countries during calendar year 2017, the following recommendations were made to President Trump: “Designate Nigeria as a CPC under IRFA; Seek to enter into a binding agreement with the Nigerian government, as defined in section 405(c) of IRFA and to train specialised police and joint security units to respond to sectarian violence and acts of terrorism.

The report also recommended that the federal government should conduct thorough investigations and prosecute future incidents of sectarian violence and terrorism and suspected and/or accused perpetrators.

Similarly, it advised the Trump administration to support the Nigerian government in the development of counter and deradicalisation programmes, ensuring that all military and police training educates officers on international human rights standards.

When asked about his planned visit to Nigeria and the proposed meeting with Africa’s religious leaders, Brownback said: “We will certainly invite foreign ministers from Africa. We’ll invite NGOs and religious leaders from Africa as well. And there will be issues of concern that exist in Africa that we’ll be discussing. I’m planning soon a trip to Nigeria, where there’s been a great deal of conflict between Christians and Muslims in that country. The president of Nigeria was recently in the United States meeting with President Trump, and one of the discussion items was the reduction and the need to reduce violence, particularly that spawned and done to religious organizations and around churches and mosques, so these topics will come up, they’ll be addressed.

“We hope to have follow-on dialogues and meetings in the African continent and in African countries about religious freedom, because we don’t want this to be a single event, what we really want to do is to press forward and to drive this in individual countries that maybe aren’t as religiously free as they aspire to be, or to get them to aspire to be more religiously free, and embracing this.”

According to the American envoy, his trip to Nigeria will be to engage with the President Muhammadu Buhari administration on how to reduce violent conflicts in the country.

Brownback added: “There were a number of Christians that had recently been killed, that the President (Trump) cited to. And there’s violence in Muslim portions of the country as well. It will be a follow on to that. It was a trip being planned earlier, but Nigeria’s such a big country – biggest population in Africa – a key country, and there just has been a lot of violence directed at people of faith in that country that I want to come and try to work with the government on ways possible to reduce that level of violence towards people of faith.